In 2009 Dallas Children’s Theatre produced the national premiere of don’t u luv me? by DCT resident playwright Linda Daugherty, directed by Nancy Schaeffer. The play presented the issues of escalating teen violence leading to rape in a comprehensive, realistic and compassionate manner. 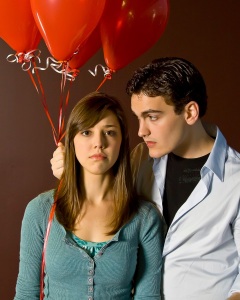 Beautifully acted by its adult leads Lauren Rosen and Montgomery Sutton with strong support from DCT Teen Conservatory actors, the play made a poignant case for the need for better communication, early recognition of inappropriate behavior and self-esteem reinforcement in teens. I found the performance evocative and profound, marveled at how cell phones and texting seemed to impact teen interaction with invasive intensity. Since then, across the US, we have seen a sad proliferation of peer abuse and bullying, predatory attack through social media and cellular phones, leading to suicide by some victims.  Since its 2009 premiere, the play has been produced at over thirty-five high schools across the US. Very timely to re-mount it for the 2011 Road to Resilience Conference. Reprising their roles, Lauren Rosen (now 22) and Montgomery Sutton (age 24, back from directing a theater company in New York City) bring an enhanced grounded sense and focus to their portrayals. As fine as their work was before, they find new depths and intense pathos as their characters’ relationship blossoms and disintegrates into alienation and violence. Highly accessible to teens, their performances possess equal impact and interest for adults. The dominating set element of their ubiquitous text messages, projected prominently on upstage screens throughout the play, sometimes in red hues, drives the play forward with an obtrusive and ominous urgency. Forty percent of teen-aged girls report knowing someone their age that has been hit or beaten by a boyfriend.

Please listen to the interview I conducted with Lauren and Montgomery and DCT PR Director Lisa Schreiner Goss, discussing the challenges this play and its characters present and how the stage combat works effectively and safely.

Attend the conference and see its productions and readings. The DCT Academy’s Teen Conservatory performs EAT (It’s Not About Food) and Booker T. Washington High School students offer a reading of The Secret Life of Girls as part of the Conference’s instructive presentations. hard 2 spel dad, directed by Robyn Flatt, the second professional production,  performs in repertory with don’t u luv me? through February 20.

For more information or to register: 214-978-0110 or coy.covington@bakeridea.org

Time Magazine has chosen Dallas Children’s Theater as one of the five top five theaters in the US performing for young audiences and families.