As its 2011 festival season commences, Fort Worth Opera cashes in on the “exotic allure” and ever-ready adaptability of Gilbert and Sullivan’s most famous operetta, The Mikado, with mixed results. Traditionalists may quibble over liberties taken (and frown at one non-script based scene of questionable taste) while modernists may chafe at its static quaintness straining hard to become anything but. I found myself under-whelmed by its “clever” realization and overall unremarkable vocal performance, while I respected the admirable attempt to make it more accessible to a contemporary audience.

Legend has it that a Japanese sword fell from a wall in the home of W. S. Gilbert, inspiring him to write the libretto for The Mikado, the ninth world-acclaimed comic opera satirizing British politics and institutions he created in stormy partnership with Arthur Sullivan. As is often the case with romantic legends, it’s not reality. The duo simply capitalized on timely trends. As trade expanded during the 1860’s, England became enamored of aspects of Japanese culture, with perceived exotic in ritual, costume and decorative arts. 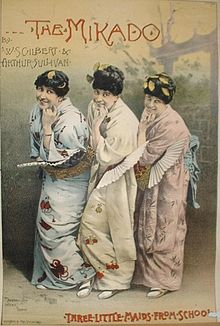 Presenting a Japan-set opera could guarantee success at the box office. Gilbert told a journalist in 1885, “I cannot give you a good reason for our … piece being laid in Japan. It … afforded scope for picturesque treatment, scenery and costume….”(Gilbert, W. S. “The Evolution of The Mikado”, New York Daily Tribune, 9 August 1885). No matter its raison d’etre, after it opened on March 14, 1885, in London, (672 performances at the Savoy Theatre, the second longest run for musical theatre and one of the longest runs of any theatre piece up to that time), The Mikado was embraced and performed by at least 150 companies that year alone in both Europe and America. It’s the most frequently performed Savoy Opera, bar none. Until the D’Oyly Carte Company’s closure in 1982, there was no year in which numerous companies did not tour it. In 1886,Vienna’s leading critic, Eduard Hanslick, considered the opera’s “unparalleled success” as attributable not merely to the libretto and the music, but to its “original stage performance, unique of its kind, by Mr. D’Oyly Carte’s artists… riveting the eye and ear with its exotic allurement.”(Jacobs, Arthur. “Carte, Richard D’Oyly (1844–1901), Oxford Dictionary of National Biography) Over the years, producers and directors have freely altered and updated its libretto to reflect changing mores and topical humor, with the Lord High Executioner ’s song, “As Someday It May Happen” lending itself handily to modernization.

As some day it may happen that a victim must be found,

Katisha & The Mikado on Segways

but treads the stage clumsily as if about to trip over its awkward billows when dismounted. Scant rehearsal time spent checking out this costume’s challenges? Granbury native and Opera Studio artist Logan Rucker looks like he sauntered in from a Village People revival in a less than flattering brown spotted cowhide chaps faux cowboy outfit. It doesn’t help that he possesses a broader than trim physique, or that his warm, workmanlike tenor voice never quite attains the sweet virginal lyricism to which the ‘wandering minstrel’ role of Nanki-Poo aspires. The male chorus, presenting a visually pleasing sea of institutional grey conformity, sounds tense and tentative. Baritone Lane Johnson, in his FW Opera debut, gives a strong performance, joining comic antics seamlessly to impeccable voicing, as Ko-Ko, the hapless Lord High Executioner. Costumed straight out of a community theatre production where High School Musical meets Grease, this production’s Yum-Yum and her “three little maids” are so distractingly crass and unattractive to watch it’s hard to remember they perform principal singing roles.

Soprano Jessica Cates, a Festival Young Artist with impressive performance resume, brings the most depth and dimension to this production with her depiction of the heroine Yum-Yum. Her Act II solo, “The sun whose rays”, conveys the essential brilliance of Gilbert and Sullivan’s satire while allowing the audience to drink in her considerable singing talent. It’s the least hyper-kinetic and most effective moment in the performance.

In keeping with the tradition of libretto updating, Director John de los Santos has woven in multiple references to current celebrities, politicians and pop culture trends, from birthers to Donald Trump, Twitter to Kinky Freidman and Oprah: “Oprah has a list and you don’t want her pissed.” An Act II patter song gets totally transformed into a list of Made in Japan products, from “Hello Kitty” to Honda, inspiring gales of guffaws from a surprised audience. Stretching the plot beyond adaptation, Yum-Yum’s wedding song with her maids becomes a bachelorette party with a grotesque Sumo wrestler/stripper, who allows the girls to stuff bills into his diaper. His costume ‘additions’ of free-swinging pendulous breasts waggle about in exceedingly poor taste and would be more appropriate in an Oak Lawn nightclub cabaret drag act. My waning tolerance for the smug libretto updating excess ended at that point. Of the many, many productions of The Mikado, this will not go down as among the worst. I doubt it will be celebrated as a triumph of innovation in the annals of Fort Worth Opera, either. A director’s concept should never, ever overpower the integral essence of a production. Go to laugh at the contemporary reference, enjoy the intriguing visuals and some of the singing. Gird yourself for the irreverent, gratuitous, overdone “blue” aspects.