Chamblee Ferguson is Dallas Theater Center’s Marathon Man. Is there any style of stage performance he can’t master with skill, dedication, depth and passionate lyricism? 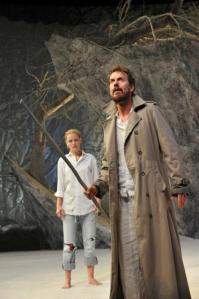 As brimming over with detailed, ornate stage settings and effects as DTC’s current production of Shakespeare’s The Tempest may be, Ferguson negates the need for any of it and would give breath to a stunning Prospero on an empty stage illuminated with one bare light bulb. His magic wells up from within and doesn’t need gussy and dazzle to beguile the audience. Isn’t that what great teaching masters say real acting is about: invoking the simplicity of inner truth?

Prospero, on one level, is a political man for all ages: a wronged, betrayed leader nursing a grudge the size of a primordial redwood forest that festers to Machiavellian boil as he engineers opportunity to wreak revenge on his kinsmen enemies with black magic.  How many modern day American politicians would relish the chance to brew up disaster and mayhem to torture and trounce ideological enemies? But somehow amidst the execution of his rage-driven dire deeds, Prospero finds the unexpected enlightenment of forgiveness, transforming him and almost all whom he encounters while he abjures all future magic making. Ferguson’s steady, focused portrayal of the manic sorcerer, fueled with inner fire and dignified, eloquent humility, could cause seasoned generals to weep. “Though with their high wrongs am I struck to th’ quick, /Yet with my nobler reason ’gainst my fury/Do I take part. The rarer action is /In virtue than in vengeance.”(5.1.27-28)

Written in 1610 as extreme post-Reformation censorship of stage plays expressing political views divergent from the dominant Protestant schism threatened an end to dissident theatrical expression, The Tempest plays successfully on multiple levels. It’s not only William Shakespeare’s intensely personal farewell to the stage (with Prospero his deliberate dramatic stand-in) it’s one of his finest examples of coded writing (where subtext urges return to England’s true peace and harmony under coexisting Catholic and Protestant doctrines) and masterful use of psychomachia: where good and evil spirits, or elements, war over possession of the soul. Prospero is the willful, intellectual writer with airy spirit Ariel his liberated, creative imagination, his higher self. Caliban, his monster “mooncalf” slave, represents his “lower self” and the demonic, dark side of the repressive English regime. Prospero’s daughter Miranda represents both his soul and Shakespeare’s vision of the true spiritual nature of England, almost snuffed out by Caliban. Her marriage to the honest, kind-hearted Ferdinand, representing tolerance, reflects the playwright’s hope for peace, an England without violent, doctrinaire strife. The exquisite theatrical charm of the lovers’ bantering chess game scene presents the respectful harmony attainable between the “dark” reformed faith and the “fair” old religion. Master of double-speak! As Ferguson’s Prospero steps downstage beyond the footlights to deliver the play’s famous epilogue, pleading sotto voce, “Please you, draw near”, one pictures the 45-year-old William Shakespeare stepping forward from the shadows. He utters those words for the final time to an adoring, awe-struck crowd at The Globe Theatre in London, before packing his bags to return to his country home in Stratford, never to write again. It’s hard not to cry out, “Please, no, don’t go!” as the Wyly Theatre house lights come up and the company bounds onstage to take its curtain call. Now that’s satisfying acting.

The other performances? Not widely noteworthy. The role of Ariel is sung with tuneful, angelic lushness by half-naked Hunter Ryan Herdlicka. His acting of the role, sadly, falls somewhere between Sylvia the dog in A. R. Gurney’s 1995 play of that name, Puck in A Midsummer Night’s Dream and being Prospero’s “sassy gay friend”. Stage West’s Founding and Producing Director Jerry Russell offers a consistently convincing portrayal of the “honest old counselor” Gonzalo, filling the stage with genuine goodwill and baffled confusion, a solid performance with no trace of “ham” whatsoever. In reflective balance to Ferguson’s Prospero, Steven Walters’ Ferdinand exudes a noble sorrow at the perceived loss of his father and future responsibilities as a young, shipwrecked king, and is a worthy marriage partner for the pure Miranda. Brierley Acting Company member Abbey Siegworth plays Miranda as the epitome of joyful innocence and exuberant youth. 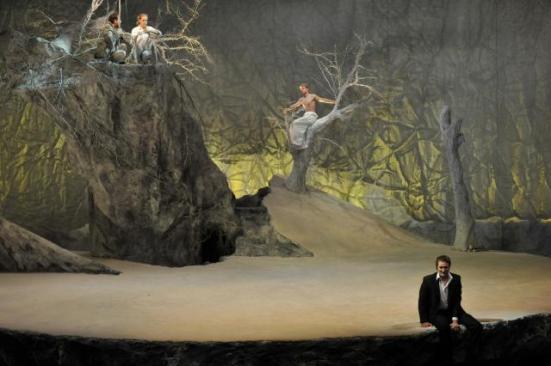 Beowulf Boritt’s integrated, Star Wars-hinting scenic and costume designs in metallic, stark, icy white, ecru, sand and beige tones with occasional inexplicable anachronistic elements and contrasting austere, black modern day suits on Prospero’s bewitched enemies make potent, attractive visual impressions. They hardly help communicate the amazing spiritual transformation at the play’s core. A tangible sense of shipwreck (plane-wreck?) after a horrific storm or of a magical island kingdom inhabited by spirits would not get conveyed here clearly if one didn’t know the play. Snow on a desert island? They could be far up in the Himalayas. Opening the production with an absurdist-styled enactment of an airplane crash with added contemporary pilot dialogue would make more sense if the contemporary plane motif figured somehow, somewhere, into the rest of the performance. Light design by Clifton Taylor and sound design and composition by Broken Chord illuminate and enhance Prospero’s world with inspired brilliance.  Attend Dallas Theater Center’s The Tempest for this main reason: the resonant blend of art and skilled craftsmanship of two gifted Men of the Theatre. Admittedly, it’s getting better. Even trimmed down as this is to a no intermission feature film length, this production feels closer to Shakespeare’s work than DTC’s two previous Bard mountings at the Wyly.

The Tempest runs through Oct. 9 at the Dee and Charles Wyly Theatre at the AT&T Performing Arts Center. Directed by Kevin Moriarty.

2 thoughts on “Tempest in a Galactic Teapot: Dallas Theater Center Does Shakespeare, Again”