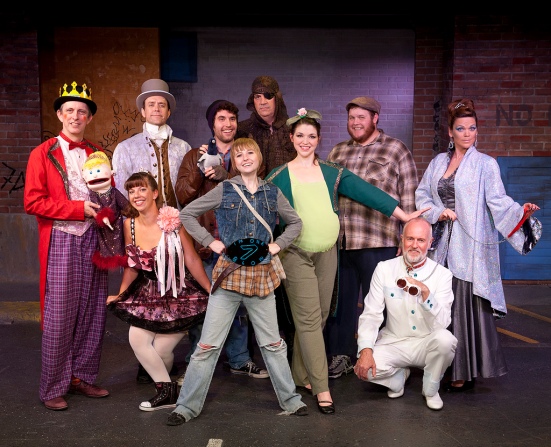 Full cast: Seven in One Blow or the Brave Little Kid

There’s a real art to writing and mounting children’s theatre. That’s why there are companies that specialize in both, why beaucoup sums of sponsorship funds get solicited to assure the genre’s continued success. It’s not something to be tossed off lightly or thrown up on a whim. Overly clever, hyperkinetic, absurdist adult satire and children’s theatre do not generally appear in the same sentence much less occupy space together on stage. To comprehend satire, one must understand what’s being satirized. Not so much where children function.

For some reason Fort Worth’s well-respected Circle Theatre decided to produce what appears to be a children’s play for its main holiday show. It’s a panto. Ask any third grader? According to About.com: “Panto (another name for Pantomime in the UK) is a peculiarly British tradition of winter musical comedy theater. It takes familiar fairy tales and children’s stories and adds “music hall (British Vaudeville) sensibility, contemporary references and audience participation to create a raucous, noisy entertainment that’s fun for everyone in the family.” Circle Theatre’s particular panto, Seven in One Blow, or The Brave Little Kid comes across as an overly clever, hyperkinetic, absurdist satire, where the adult-focused energy, metaphor, smug references and inside jokes never stop. I’m being kind.

Trying to find a rationale for this wretchedly confusing production, I looked up the playwright Randy Sharp and New York’s Off Off Broadway Axis Company, where she is Artistic Director. Performing since 1998 in a space that once housed the celebrated Charles Ludlum’s The Ridiculous Theatrical Company, Axis Company under Sharp’s guidance has distinguished itself with “an eclectic series of original and published plays (including Buchner’s Woyzeck, Beckett’s Play and Benjamin Baker’s 1848 sensation A Glance at New York.” In its 2005 Best of Off Off Broadway recap Theatermania applauded Axis for presenting Not Yet Diagnosed (Nervous) 1918…a haunting show that depicted shell-shocked WW-I veterans trapped in their memories…blending expressionism and absurdism,” It sounds like thought-provoking, creative, adult fare. But where does panto and children’s theatre fit into this picture? According to one review I found, the Axis Company wrote Seven in One Blow as a team effort, creating commedia dell arte-styled stock characters. I decided to careen down this particular Lewis Carroll rabbit hole no further. The director’s note in Circle Theatre’s show program offered no helpful explanation, either.

There’s lots of enthusiastically urged audience participation in this production. I watched parents accompanying small children to the theatre pressing their wide-eyed youngsters to participate. Some of them even did. There are a slew of absurd, adult-geared situations: for example, a king with a dummy for a queen, who has no money, as he can’t get his subjects to pay taxes, a real thigh-slapper. There are even more absurd characters. Examples: a singing, dancing green pea that enters disguised as a wraith-like ghost (who intimidates the king’s subjects into not paying their taxes); a man all in white called December who gets dragged around bondage-style by a witch in an evening gown who wants nobody to sing; and a character self-described and costumed as The Scarlet Pimpernel, who speaks in elevated, formal language appropriate to the French Revolutionary period. The play’s main character, dressed and referred to as a boy until the last scene, seems an unnecessary victim of a PC edit, when “outed” as a girl. The play does not feel like it warrants an intermission, but it takes one.