That radical Baruch de Spinoza, on trial at Stage West…. 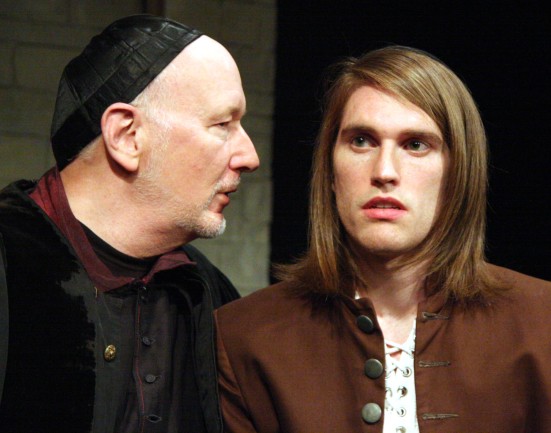 And now, from the brave folks who brought the Dallas-Fort Worth region Frayn’s Copenhagen and Mamet’s November, comes another spell-binding brain-teaser of theatrical invention: David Ives’ New Jerusalem. Deepest bows to Stage West in Fort Worth for continuing a tradition of producing plays that challenge an audience’s intellect as well as entertain them.

Occupy New Jerusalem. Get it? Shift that paradigm: go to jail. Ives’ play posits that not much changes in human life drama, no matter the era or style of dress. In 1656, a 23 year old rabbi prospect and exceptional student of philosophy gets called on the carpet, interrogated at Talmud Torah Congregation in Amsterdam, for his new ideas that threaten the closely guarded world view and the security (financial and otherwise) of the town’s powers that be. He questions man’s relationship to God, the very nature of God. During the interrogation he gets threatened with excommunication for spreading these radical ideas in a public place and poisoning the minds of impressionable young people at cafes. Sound familiar? The young man, Baruch de Spinoza, is way smarter than his baffled, terrified inquisitors and a wisecracking purist, as well. How dare he?

Ives’ splendid play portrays actual events that took place on July 27, 1656, presented as courtroom drama. The audience becomes the Jewish congregation attending Spinoza’s investigation, which amounts to intellectual persecution for his views ‘outside the box’ and broadcast of those heresies. The play and this production neither yawningly preach nor weave so metaphysically complex an argument that only a doctoral philosophy candidate could keep up. Spinoza’s bon mots delivered with Oscar Wilde-like panache (“There is no Jewish dogma, only bickering”) pepper Ives’ script. Perfectly timed, interruptive outbursts by Spinoza’s shrill sister Rebekah remind the audience he’s a regular human being saddled with an outrageously outspoken family member.

Directed with soulful dignity by Jerry Russell, Stage West’s production creates a viable, entrancing reality in muted, elegant tones. The somber mood reflects the ambiance of 17thcentury Amsterdam and allows its actors to explore the script’s nuanced ideas with internally driven, natural expression. The language and pace feel modern; the style is period; the blend, spectacular. 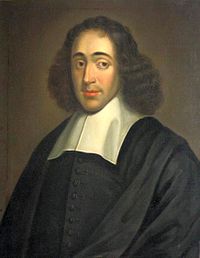 Amsterdam bureaucrat Abraham Van Valkenburgh, a Gentile, controls the investigation and enlists the support of Jewish rabbi and congregation elder. Russell Dean Schultz portrays Abraham at first as an unsympathetic, unyielding man, seemingly bent on preserving the status quo with imperious disdain. But Abraham bears this power more as a sacred trust than egotistical control device. Schultz follows the arc of Ives’ intricately drawn character to the letter with subtle skill; by the play’s conclusion he transforms Abraham into a feeling human being faced with a serious governance challenge he must resolve, with the lives of many at stake. His Abraham does not inhabit a black and white world, nor does he judge from one. Michael Corolla’s elder Gaspar ben Israel natters and fawns with self-deprecating superficiality where it best serves him, at first fiercely defending Baruch then casting him off coldly like tainted meat when the truth comes out. Angela Owen’s Rebekah, whether shouting from the house seats or clambering roughly over audience members to berate her brother down front, brings fresh perspective to the male-dominated conflict. She adds humor by harangue and breaks the play’s intellectual flights into comprehensible beats. Not just comic relief as written or portrayed, she serves to remind the audience that they are the congregation, then and now – that they exist in a world where new thought often gets repressed by people in power, with major consequences.

Baruch de Spinoza, at the dawn of his life as a world-class philosopher, gets a humanizing, non-lofty treatment by playwright Ives. He’s an earthy, wide-eyed, impatient, gullible lad. Not humble in the least, he feels no qualms about sharing his philosophical and theological musings with any and everyone, wherever, whenever they will listen. He knows he’s on to something big: just pay attention. His compulsive dedication to the search for truth blinds him to the enormity of the applecart he upsets with his “wild ideas” and the dilemma he creates for his community elders.

Stage West cast newcomer Garrett Storms, also age 23, in the role. Lanky and a tad gawky, with luminous eyes, genuine, wide grin and innate vitality that swells up with ease and charm every time he speaks, Storms is a gift to the role. He personifies Baruch surely as David Ives imagined him. He must carry the play and its themes with utter integrity and engaging performance or it will fall flat. Storms delights and intrigues with his portrayal of Baruch. He wins the audience’s hearts as he tries their patience and strains the status quo to the breaking point with his total refusal to recant. As Baruch’s less than loyal sidekick Simon, Samuel West Swanson makes a believable café consort, in awe of his friend’s intellect but slightly guarded with the shameful secret he carries. His portrayal of Simon reveals a capacity for acting depth and nuance he did not get to exhibit in 2011’s Arms and the Man. Barrett Nash suffers heroically with a fine-tuned mixture of repressed passion and utter intellectual overwhelm, as Clara van den Enden, the object of Baruch’s love. She’s a Gentile, no less,  from the café scene (further dismaying the elders passing judgment). 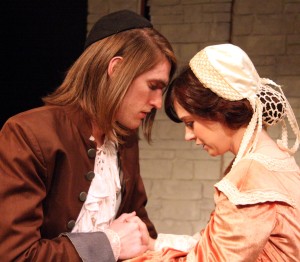 Next in importance to main character Baruch in Ives ‘ play is the wise, worldly Rabbi Saul Levi Mortera. Not only Baruch’s teacher and spiritual advisor, he’s a father figure who hopes to see the young Jew inherit his leadership role as congregation rabbi someday. Jim Covault brings a grave, Moses-like wisdom to this role, showing him to be a superior intellect on the level with Baruch, clearly his inspiration. He reveals his love for the younger man and defends him through the arguments he presents, not by overt gesture or direct statement. Covault lets us see the rabbi’s heart break with the final decision but also delicately, silently, conveys his recognition that Baruch’s ideas herald the future, a new Jerusalem in religious philosophy. An inner light of hope seems to bathe his face even as he sheds tears in banishing his treasured student. As dark and dire as the events portrayed in this play may be, it’s impossible to leave Stage West after attending a performance of New Jerusalem without a spring in the step and strengthened hope for a better, more enlightened tomorrow. What a masterful execution of an intelligent, lyrical work of art.

At the play’s conclusion, in metaphorical terms, Baruch de Spinoza gets told he may not pitch his tent in the public city park with 1,000 friends, colleagues and war veterans and sleep there night after night, in protest of a cultural paradigm that destroys the many for benefit of the 1%. In 17th century terms, he gets a cherem issued against him — cast out from his community, shunned. Shifting paradigm is tough on everyone, at any time. In Spinoza’s case, he moved on to lay the groundwork for the 18th century Enlightenment and receive full recognition as one of Western philosophy’s most important contributors. Stage West’s production of David Ives’ New Jerusalem sets the regional artistic production standard quite high for 2012. Don’t miss it.

Dine at the in house Old Vic Café before the show.

Wikipedia overview of the life and philosophy of Baruch de Spinoza (1632-1677):