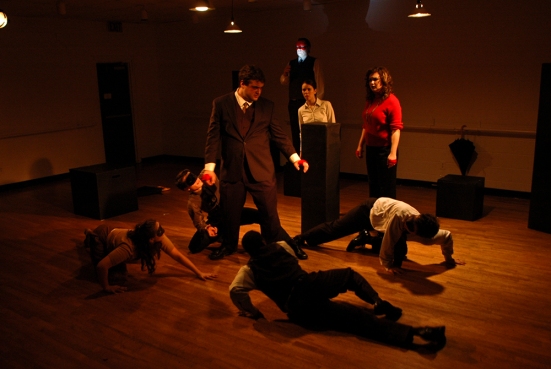 Fairly foul, fairly good.  William Shakespeare’s Macbeth gets produced fairly often, with mixed results. Guess it’s one of those “harder than it looks” plays. I’ve seen three fairly effective productions by professional companies over the past few years, both in superior venues, with large budgets for costumes and fully realized sets and effects, helmed by experienced, professional directors. Still, those professional productions worked no better than the bare bones realization of Macbeth currently running at the Green Space Arts Collective in Denton through March 11, produced by tiny Sundown Collaborative Theatre.

Sundown’s Macbethis an original adaptation in modern dress, penned by regional actor R. Andrew Aguilar in cooperation with Sundown’s Artistic Director Cody Lucas. This version focuses on Macbeth’s madness; the infamous “trio” of witches at the cauldron becomes a somber, masked movement and choral ensemble, reflecting the demon voices in Macbeth’s head, fueling his actions and madness with prognostication and visions.

Minimalist and clean in stylistic presentation, by design and necessity (given the limitations of the Green Space venue and budget), the visual and auditory impact of the zombie-like wraith chorus adds clarity to the text-dense, fast-moving adaptation. They create as much unworldly dramatic tension as the more sophisticated sets and special effects of the bigger budget, professional productions. Visitation by the ghost of murdered Banquo works well similarly, with hand-held lighting upstage behind stylized ensemble “visioning” chaos (George Ferrie, choreography). The ensemble stumbles only once, in Act II, when they pull out black umbrellas, an utterly incongruous action, unrelated to text or mood.

My only chance to review this production was opening night, the “preview performance”. Now that the ensemble has opening night jitters past, it may well slide into a tight groove and kick the Scottish Play into Highland fling mode.  Sundown’s ensemble consists of college students and recent graduates; what they lack in experience and training, they make up for in dedication and fresh originality. That said, performances are a mixed bag; direction (Rey Torres) is muddy at best. The three major characters, Macbeth (R. Andrew Aguilar), Lady Macbeth (Madelyn Blair) and Banquo (Paul Christian) carry the balance of the exceedingly dense text and drive the action in this adaptation. Their character arcs lack definition; and the sexual tension between the Macbeths is tepid, a serious issue needing resolution. All three charge through his or her lines with such rapid-fire execution, it’s hard to imagine that anyone unfamiliar with the play will be able to comprehend what’s going on. Directed to rush their lines? Slow down. Breathe. Reflect. Not all conflict starts at fever pitch. Give the audience a chance to understand motivations and actions in this major brooding work. Aguilar’s Macbeth seems awfully cerebral for a man who makes his mark as a killing machine, not a tactical genius. He enters telegraphing his complex designs on becoming king; these should not become apparent until after Lady Macbeth manipulates and convinces him with her “wiles”. King Duncan should never suspect his lieutenant’s ill-conceived intentions. Pretty hard to miss them at opening night’s performance. Later, it’s not clear later why Macbeth decides his best friend Banquo has turned against him and deserves to die; I’m not sure if that key revelation is missing from the adaptation or simply rushed past in performance.

Most satisfying acting appears in smaller roles. Robert Linder lights up the stage with engaging definition as King Duncan, the absurdly drunken porter or evil henchman Seton; Jerome Beck exhibits regal demeanor and wisdom as the slain king’s heir Malcolm (and is great fun to watch in the witchy ensemble). The most experienced, at ease actor in the cast, Cody Lucas, demonstrates believable angst as Macduff. His sympathetic portrayal of the wronged lord, husband and father is the most accessible in the show.

Love Shakespeare? Give Sundown Collaborative’s adaptation of Macbeth a chance. Perfect it may not be in execution, but the realization honors the text’s essence and creates the unhinged world gone mad as well as, and in some ways better than, other regional productions by more experienced, professional companies. Lay on, Macduff!

No photos as of this posting.