Nada, but it made a catchy title, and it caught your attention.

Three plays about love, or lust, or lost love or abuse of love….

Every festival has one entry that fits squarely into the “why produce this” category.  Here it is for Out of the Loop 2012. Thomas Riccio, playwright and “Poo Pah Doo” of Dead White Zombies, wrote this short play in 1979; it emerges from a different era’s theatrical sensibility. What may have felt fresh and shocking then comes across gimmick-laden and corny now. And it appears to glamorize spouse abuse. Does that aspect mean to be funny?

Jack (Brad Hennigan) with the baby

My viewing companions, sophisticated male performance artists (not a prude among them), appeared to feel more uncomfortable and embarrassed as the plot unfolded, than I did. The opening: a peculiar wa-ay drawn out sl-owwwdimming of lights on a seedy chaise-lounge and coffee table downstage center (strewn with sex paraphernalia), while cacophonous “music” blasts through speakers. The man, Jack, enters in a huff, parades around gesticulating wildly and chewing the scenery in progressively skimpier attire. The woman, Mary,  exists as a disembodied, loud VOX offstage behind a screen, and emerges finally as a blow-up doll.

Uneven direction by Lori McCarty and cartoon-like overacting sans restraint feel pretty “collegiate”. It was preferable to avert one’s eyes at times. Why attend? For the final grotesque, climactic moment: the Man Jack, a, blood-smeared Brad Hennigan (brave soul), wearing nothing but a skimpy jock strap, stands solo on stage.  He cradles a doll baby he has just chain-sawed out of the female blow-up doll (off stage) that he had just “killed” by raping (on stage). He coos, “I’m going to name you Jesus.” If THAT doesn’t give you a memorable, prickly visual, I don’t know what would. Thomas Riccio is a distinguished, respected performance artist, director and playwright on a national and international level. His DWZ environmental theatre production Blah Blah created one of the most entrancing, ethereal on stage realities in this region in 2012. I’m not sure why he and DWZ resurrected this early play from the dank mothballs of time. It’s a hard one to pair with anything else in the festival. Running again, Thursday 3/9 at 7:30pm and Saturday, 3/10 at 2pm.

RATING: bizarre, unless the glamour of spouse abuse thrills you

Much anticipated, this work gets its full production premiere at Out of the Loop. Written by Baylor University theatre professor Thomas Ward, starring Ward and his wife Sherry, the play shows real promise and reveals careful craft nurturance a valid work of art deserves. A tragic-comic portrait of one night spent in a Holiday Inn, the main character, a failing stand-up comic, follows a minutely detailed, if occasionally predictable, arc. His night’s companion, the motel desk clerk and an aspiring stand-up comic, reacts irrationally to her never seen husband’s infidelity but gets short shrift in the text as now written. 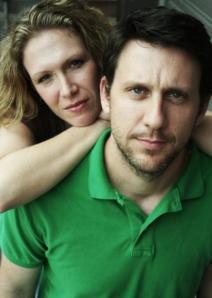 In many ways, she’s the most interesting of the two characters and deserves a less clichéd and expanded development. Presented on WaterTower Theatre’s main stage, the production feels swallowed up by the space, not quite ready for prime time. Puzzling, illogical stage business clouds the performance occasionally (where was director Bradley Jones?). The opening scene hand-job feels gratuitous and out of character for both parties. Fine use of Aristotelian unities in a contemporary work (with occasional flashback or forward), and superb acting by both Wards charm the audience (she will play Barbara in WaterTower Theatre’s upcoming August: Osage County production). Here’s hoping this short run will give Ward the inspiration he needs to continue refining his promising play. Final performance: Saturday 3/10, at 8pm.

Not every artist has an easy time getting inspiration from his muse. Some have to take the muse hostage to find that requisite inspirational fire, even solitary, obsessive-compulsive poets…. Terrence McNally’s 1968 Sweet Eros, has upset more people than any other show at this festival. For almost a half hour before the show begins, the director, Adam Adolfo, has pre-set the show’s woman (Stephanie Cleghorn) in a chair center stage, convincingly bound, gagged and struggling to free herself, while some of the world’s most beautiful operatic arias play on the sound system, drowning out her piteous moans. Before the performance I attended, a genuinely upset man approached me, asking if he could please release her from bondage. I reassured him she was acting and setting the play’s mood. Apparently, this plea has happened at other performances. Interesting when silent stage fantasy becomes so vividly real to an audience. Terrence McNally’s plays always evoke strong response.

He has had a diverse, prolific career as a playwright and earned the highest honors for his work, including: four Tony Awards, an Emmy, two Guggenheim Fellowships, a Rockefeller Grant, the Lucille Lortel Award, the Hull-Warriner Award, and a citation from the American Academy of Arts and Letters1994 Pulitzer Prize for Drama Nomination (A Perfect Ganesh)

Among his work’s awards are:

His 1997 play Corpus Christi, portraying Jesus and the disciples with homosexual orientation, has inspired outrage among the religiously narrow-minded and gets banned from production regularly. In 2000 McNally wrote the libretto to Jake Heggie’s evocative opera Dead Man Walking. McNally is now married to Thomas Kirdahy, but around the time he wrote Sweet Eros, he was reputedly Edward Albee’s lover. What sort of influence might the master of American absurdism and biting relationship drama (Who’s Afraid of Virginia Woolf, Tiny Alice, A Delicate Balance) have had on the young McNally? It causes one to consider Sweet Eros from a non-realistic perspective. It’s hard to sit still, watching the torture, degradation, rape and mental abuse the play’s young man doles out to the girl hostage, non-stop, while he rambles on, sharing his romantic history like a bad match.com profile and bursting into bipolar, psychotic rants. As a work of realism, it’s hideously cruel. But McNally doesn’t seem to have much concerned himself with the theatre of cruelty, a casual glance across his oeuvre reveals. According to the Goodreads Acting edition, Sweet Eros“is a monologue delivered by a poet, with interruptions, in the form of sobs (at first), muffled protests (at first), and the croaking of a song, ‘Plaisir d’Amour’ (at the end).” Aha.

The young man is a struggling poet in an absurdist reality. The play reveals his ritual path to connect with his muse, his “pig whore” whom he castigates for not being pure or virginal enough. As she begins to take over near the play’s end, wrapping his ‘book’ carefully with her robe’s sash, kissing him with genuine passion and calling him the same names he has called her, the poet surrenders to his muse. Looking at his rambling, searching monologue as a metaphorical, transformational odyssey makes much more sense than relegating it to cruel “realism’” punctuated with McNally’s heightened, lyrical, impassioned text. It’s an exquisitely crafted, if challenging, work of art.

Adam Adolfo brings his cast to life with pulsating, breathless ferocity. Abel Flores, Jr. never lets up as the oddest of young poets, going to bizarre extremes to connect with his muse, a serial activity, well planned out with demonic, ritual force. Most of the time, he rambles along eerily, in a reflective, disaffected monotone; when he rages his voice lashes out with all the power and passion heard in the pre-show arias, filling the Stone Cottage venue with pain and anguish. The woman rivets audience focus: on her suffering, her beauty, and her vulnerability. Is she real, or just a device, a fantasy creature the poet invokes to inspire his creative passion? Stephanie Cleghorn gives a terrifying, tortured performance with almost no words, compelling and mystifying. Convincing at first as a young woman held hostage against her will, she evolves subtly beyond simple definition as his surrender to her becomes complete. This production, QLive!’s first entry at Out of the Loop, offers an overpowering, emotional, artistic experience that does real justice to McNally’s unusual early one-act play.

Final performance was Friday, March 9, unless it wins Best of the Stone Cottage productions. Which it could.

Best of the Loop will be announced Saturday evening, 3/10, voted on by Loop pass-holders. All three winners will perform again Sunday 3/11 at 7:30 pm.