A funny thing happened on the way to the National Theatre. Zing! As part of its international series, the “best of British theatre broadcast live to cinemas around the world” National Theatre Live scores a soaring comic “10” with its filmed presentation of A Comedy of Errors. 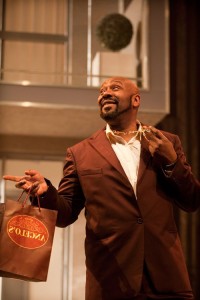 This early William Shakespeare’s work gets overshadowed by his later, more complex plays and often receives superficial treatment of its themes of self-recognition and the search for identity. Its farce elements, and the widespread confusion they cause, become many productions’ entire focus, rather than serve to illustrate the human conditions they examine. The film version of the National Theatre’s modern dress production reveals a satisfying balance between human dilemmas and their comic manifestation.

Am I in earth, in heaven, or in hell?

Known unto these, and to myself disguised!

Shakespeare loved to people his plays with twins separated at birth under traumatic circumstance, who re-unite later and don’t recognize each other. In the case of the National Theatre’s The Comedy of Errors, two sets of identical twins, one pair noble (named Antipholus) and the second the first pair’s servants (named Dromio), encounter each other in crumbling, recession-plagued Ephesus, where one pair is known and respected by the community, the second overwhelmed foreigners. 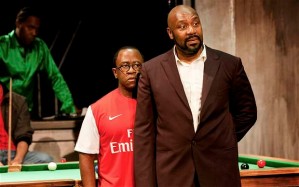 The farce aspect (which the audience must accept implicitly) turns on mistaken identity, where family members and business associates, a golden chain and misplaced money exchanges feed the plot that earns the play its title. Meanwhile the noble twins’ downtrodden father Aegeon, captured while searching for his sons, faces execution before sunset for being an illegal immigrant, unless he can find someone to prove his true identity.

Director Dominic Cooke ramps up the farce at supersonic pace with a culminating Act II madcap cops and robbers-style chase through and around a multi-level apartment building on a spinning revolve, with a real ambulance engaged in on stage pursuit. Yet he balances the cacophonous mayhem engendered with genuine emotion from his cast. At the play’s final moment of resolution, the noble twins reverently clasp hands and exit up stage together in companionable silence; order restores itself with their newfound peace in self-recognition and acceptance. Cooke adds an earthy touch with a strolling band of raggedy, blue-collar troubadours that meander throughout, singing classic British pop hits in lusty Romanian.

Brought fully to life with superlative diction and text delivery, sophisticated multi-racial casting, hilarious detailed costumes on a multi-dimensional set full of mood-setting thrills and chills of its own—anyone who loves Shakespeare should not miss the National Theatre Live screening of The Comedy of Errors at select theatres.

Lenny Henry (Antipholus) and Mucian Msamati (Dromio) in The Comedy of Errors at the National Theatre:  Photos: Johan Persson

One thought on “Something for everyone: National Theatre Live, tonight!”