The play’s history and accolades: Chicago’s Steppenwolf Theatre Company (where playwright author Tracy Letts is a longtime company member) first produced August: Osage County in 2007, directed by long time collaborator, Anna D. Shapiro. It had a very successful run on Broadway and a lengthy, well-attended national tour, starting in 2009. It has also been performed in Argentina, England, Germany, Australia, Israel, Sweden, Spain, Peru, and in adapted form – India. And in Oklahoma City and Austin.

August: Osage County started collecting awards in 2007. It received the Jeff Award (Chicago) for Best New Work and Best Production. Close behind, the play received six other high profile awards in 2008: Best New Play awarded by Drama Desk, Distinguished Production of a Play by Drama League, the New York Drama Critics’ Circle Award for Best Play and Outer Critics Circle Award for Outstanding New Broadway Play. 2008 earned it the Pulitzer Prize for Drama, shortly followed by a Tony Award for Best Play, both pinnacle achievements in the thespian world. Time Magazine named August Osage County its Number 1 Theater Production of 2007. In 2009, Entertainment Weekly included the play on its end-of-the-decade, best of list. The critics at the magazine said that “despite its three and a half hour length, the director and the actors managed to create a moment of pure theatrical electricity”. And on and on.

It’s about time some north Texas region company mounted August: Osage County. WaterTower Theatre has the right main stage venue, the seasoned creative producing acumen and bold encompassing regional vision to pull it off. Wisely borrowing the director and lead actress from the 2010 Oklahoma City Repertory Company version to enliven this three-hour wisecrack-laden and surprisingly ferocious family saga, Terry Martin engaged Rene Moreno to direct and Pam Dougherty to reprise her role of matriarch Violet. Both keen choices. As productions go, this A:OC has a vital light and life all it’s own.

This is my fifth viewing of A:OC, the fourth production. That must make me a “Westonie” in Star Trek fans’ “Trekkie” terms. I can’t seem to get enough of this play or tire of its dysfunctional characters and rambling plot, its epic grandeur or efficiently distilled language, its lifetime experiences and truths melting away in mournful song as familial storm clouds disperse at the conclusion. The women of the Weston clan entrance me. There’s no clichéd character among them: vocal, expressive, passionate, clearly delineated as ‘chips off the old block’ but fully fleshed out with individual joy, pain and expectation. Letts allows us to see traces of the spunky, vibrant girls they once were, ghosts in shadow play behind the bitter, desperate, hopeful, enduring women they have become. There’s gaudy Mattie Fae and her elder sister Violet, locked into the formal dance of the “Greatest Generation”, with its secrets and closeted resentments, “women’s roles” and the comforts of pills and booze. Consider Violet’s three daughters Barbara, Ivy and Karen, as different as life paths can mold but joined inextricably by habituated familiarity as much as deliberate intention, each sure she was “Daddy’s favorite” secretly, all still longing desperately for Mom’s grudging acceptance, if not her full blessing. Who better to direct this concentrated cacophony of estrogen but Rene Moreno, sole male child in a family of many sisters?  Jessica Cavanaugh (Karen), Kristin McCollum (Ivy) and Sherry Jo Ward (Barbara) breeze through the set and with and around each other with the comfy ease of life-long knowing. They mirror each other’s habits, subtly, almost subconsciously, as only sisters would. They don’t just speak the lines from the page. They live them, all superior actresses in their prime, capable of playing scripted highs and lows with delicacy and care, sensing when to hold forth, when to blend back into ensemble. Add in the next generation, Barbara’s troubled, resentful daughter Jean (Ruby Westfall), the “innocent teen”, playing everybody for what she’s worth, tripping out and getting in over her head, just like her pill-popping grandmother Violet. There’s the rub.

I don’t care what magnificent performance every other actor in this play gives. Letts’ play makes it or falls apart with Violet. Its success depends on the arc her character follows, on the confrontations she sets up, on her responses to blows she is dealt, her lies and manipulation, her self-deception and irrational fear. This is a truly great role, like Amanda in The Glass Menagerie or Martha in Who’s Afraid of Virginia Woolf? I’ve seen Violet played by thin, wiry women with tons of kinetic energy flitting around the stage, and I’ve seen Pam Dougherty play it twice. For my money, Dougherty’s portrayal truly embodies Lett’s Violet.

Her Violet is a woman of power, substance and determination, brought low by age and infirmity, reliance on pills and estrangement from those she has loved. In the Oklahoma City Rep production, Dougherty’s Violet seemed a victim of circumstance, her savage verbal attacks the defense mechanism of a terrified, bereaved woman who surfaces only occasionally from a pill-popping haze.  In WaterTower’s production, Dougherty’s Violet exhibits a deliberate malevolence, like a savage beast that leads her prey along to seek out its vulnerabilities and go for the jugular. Lurking constantly, face always turned from the audience, in a high-backed chair on an upstairs level, even when not part of a scene, Violet’s presence pervades director Moreno’s production as I have not seen it do before. Dougherty’s Violet haunts the stage. Even as a woman of small stature, Dougherty commands every stinging, poignant moment the script gives her and every scene Moreno pivots her through. She becomes Violet. I dare you to turn your eyes away when she’s on stage.

Part of the Pulitzer and Tony-worthy artistry of this play is how Tracy Letts allows the secondary characters to carry the play’s themes while flourishing as fully developed, believable people in complement to the leads. What nuanced gem roles for actors with real chops. The secondary family grouping, Violet’s sister Mattie Fae, her resigned, browbeaten husband Charlie and their dependent, slightly “slow” son Little Charles are every bit as interesting as the Weston group and reflect the playwright’s thoughts about family and love through action and word.

Nancy Sherrard’s characterization of Mattie Fae is as perfectly realized as Dougherty’s Violet. While Violet had pretensions to class, Mattie Fae epitomizes Oklahoma bourgeoisie. Sporting tacky clothes and brassy hair, blurting out inappropriate comments about body parts, spouting a gushy congeniality that belies her endless boredom and frustration: it’s just too much fun to watch Sherrard’s Mattie Fae wind up and go to town, giddy with a smarmy shellac of status quo self-satisfaction.  Far crueler in many ways than Violet, Sherrard’s Mattie Fae earns her stern come-uppance in Act 3, inspiring a rousing cheer from the audience. As her husband Charlie, Tom Lenaghen gets to deliver the two best-written, most potent speeches in the play. His natural instincts take him to the breathless brink of insufferably intolerable with his stuttering, befuddled delivery. Charlie’s Act 2 prayer at the dinner table is one of the play’s finest moments, delivered impeccably by Lenaghen. Moreno’s firm direction gives the audience a brief respite from the play’s rollercoaster pace with the marvelous contrast Charlie offers, which Lenaghen ably brings to life. Clay Yocum’s performance as their son Little Charles fills in the blanks for his parents’ loveless marriage. The audience cringes empathetically with his every tortured utterance, overwhelming self-deprecating defeatism and naïve longing for a better life. All together, the trio creates a nightmare portrait of the American Gothic nuclear family. It’s a somber revelation, a masterful feat, realized by three fine actors in synch.

Soon to-be–ex-spouse/ almost spouse-to-be/ and the one that got away: SMU professor and regional top actor James Crawford turns in another classic, understated, brilliant performance to add to his outstanding CV as Barbara’s insufferably pretentious, patronizing husband (soon to be ex with younger student girlfriend) Bill. At the end of Act 1, I wanted to leap from my seat and slit his throat for how he treats Barbara; talk about an actor who can pull even a jaded critic “into the moment.”

Bill and Barbara: A quiet moment

Chris Hury’s distracted fiancé earns the audience’s laughter, then utter revulsion, with unabashed honesty as Karen’s thrice-divorced, dope-smoking real estate tycoon amour. The devil made him do it? Oh, so creepy. Lanky, soft-spoken Stan Graner has two short, but pivotal, scenes as the town’s sheriff, Barbara’s “beau” from prom days. His character sets off the play’s major transitional explosion early on and awakens another character’s self-revelation in Act 3.  Steady and restrained, Graner’s Sheriff Gilbeau conveys much-needed normalcy to the Weston madhouse. As directed by Moreno, he brings a stoic peace, or its promise, to a world gone wild with intrigue and deception. I question the sheriff’s second scene, if it’s truly needed in an already long, complicated play. It works as well as it can in this production, as performed and directed.

And what about Dad? Causing all the clan commotion with his unexplained disappearance, writer/professor Beverly Weston delivers a haunting monologue in rambling confessional format to his new Native American housekeeper (Sasha Truman-McGonnell) as a prologue to the play, and then goes away. He quotes T.S. Eliot and John Berryman, describing the Oklahoma plains as “a state of mind, a spiritual affliction like the blues…” The audience senses that Beverly already has his focus on the great beyond. 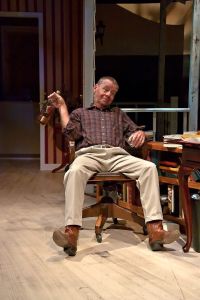 Cliff Stephens makes a mournful lasting impression, foreshadowing the approaching maelstrom, from his cursed half sentences brimming with nostalgic caress and world-weariness to his devil-may-care stagger off stage, shoulders stiff and resolute. “Dissipation is worse than cataclysm.” Maybe he plans the melee that unfolds as his final great work of art, a blow for anarchy.

I agree with Charles Isherwood’s analysis of August: Osage County as “the most exciting new American play Broadway has seen in years,” or any place else, for that matter.” Water Tower Theatre’s production rises to the challenge with its fine acting ensemble and Rene Moreno’s superb direction. Its set, filling the entire acting space on three levels, tends to fight the actors at times (during the two staged combat moments, for example, both of which looked awkward and “blocked” on opening night). The lighting does not add constructively to the production, either. In some scenes, light bathes separate, yet adjoining, rooms in a wash that makes them appear open together, illogical for the action taking place. In Act 1 all windows in the house are covered with butcher paper to shut the light out; by Act 3, the paper gets pulled off, yet the light in the home never changes to reflect this.)

This isn’t an un-messy, nearly perfect, play, like Tom Stoppard’s The Real Thing running through April 29 at Stage West in Fort Worth. It’s not even as classically balanced in script and character arc as Tracy Letts’ 2008 Superior Donuts, running through April 15 at Theatre Too, downstairs at Theatre Three. But its’ no dumbed down, flip, superficial emulation of a television sitcom script, like so many plays presented today as main stage productions. Tracy Letts’ August: Osage County is superb stage art, built to last, to entertain, to illuminate. It demands thorough professional engagement from its performing ensemble and director.  It beckons its audience to follow close for a deeply moving, exhilarating, transcendent ride into the soul of a passing American way of life, with Eric Clapton tunes wailing loud in the background.

August: Osage County runs through April 29, 2012 at WaterTower Theatre in Addison, Texas. Thanks for mounting it here, y’all. www.watertowertheatre.org, 972-450-6232

My review of the Oklahoma City Rep production from 2010:

My review of Stage West’s The Real Thing, by Tom Stoppard:

See & support great theatre! Without the arts, we have no cultural soul. Your continued attendance keeps these companies, and the art, afloat.

All photos by Mark Oristano

One thought on “An August, Osage State of Mind: Letts Ride at WaterTower”