Hastings and the retainers in "She Stoops To Conquer" at London's National Theatre, filmed by NTLive

What precisely does an Etiquette Consultant do? Given how splendidly every character misbehaves in the National Theatre production of Oliver Goldsmith’s “She Stoops to Conquer” and with glorious abandon, some intentionally, some by “accident of station”, I’d guess the old EC spends most of his/her time sipping tea at the craft table. Unless the delectable quality and profusion of elegantly synchronized misbehavior is by EC design? Listed in the program….

Never mind. The National Theatre production, viewed worldwide through the ingenuity of NTLive, brings forth a version of this 1773 Restoration comedy fresher, sexier and equal in accessibility for modern audiences to any highly rated contemporary cable television romance . With Donmar Warehouse’s Jamie Lloyd directing a superb stage cast, how could the production miss?  Just in his early 30’s, Lloyd’s direction has been setting the London theatre world on fire for a while. Whether it’s The 25th Annual Putnam County Spelling Bee or Piaf or Three Days of Rain, Lloyd works theatrical magic on every script he takes on. Michael Grandage, Artistic Director of Donmar Warehouse from 2002 through 2011, reveres Lloyd as a formidable talent. “He is clearly an actor’s director, delivering forensically intelligent performances at the centre of all his work, but he is also someone who takes his responsibility to an audience very seriously and has a mature understanding of how to create an intense theatrical experience.”

A surprisingly ‘intense theatrical experience’ is an apt description of the National Theatre Live production of “She Stoops”. Forget stodgy, boring Restoration drama, tiresome powdered wig plays where actors pose and fuss ad nauseam in an unbecoming, academic manner. Lloyd’s production metaphorically rips the lid off the antique snuffbox; a scantily clad milkmaid gleefully scatters its contents throughout the house. Lloyd hones in on the character arcs and plot elements that best illustrate the playwright’s comic and political intentions with unwavering focus. 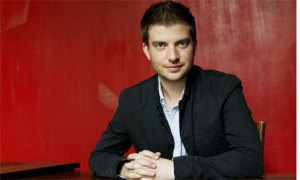 “Directors should always serve the text rather than their own ego. I always try to get back to the root of what made the writer pick up the pen in the first place.” Goldsmith’s heroine, Miss Hardcastle, played with impish joie de vivre and unabashed sensuality by Katherine Kelly, ‘sets her cap’ early on for her father’s tongue-tied gentleman house guest Marlow, and the cat and mouse game begins in earnest. She devises a clever guise whereby she ‘stoops to conquer” her designated suitor, who has bawdy affairs with working class girls but can’t seem to look his social equals in the eye, much less engage in titillating repartee. The devious Miss Hardcastle discovers the key and unlocks him handily, one fumbled button at a time. Pre-dating Jane Austen’s prim but plucky heroines by nearly a half-century, Kelly’s Miss Hardcastle woos, teases, charms and wins over the audience as much as she does the socially inadequate Marlow. Speaking of earnest, it’s hard to avoid wondering if the almost slapstick boy pal duo in “She Stoops”, Marlow and Hastings (Harry Hadden-Paton and John Heffernan in roles divinely capitalizing on each man’s talents), inspired Oscar Wilde to create his scandalously funny duo of Jack and Algernon in his 1895 triumph “The Importance of Being Earnest.” Snotty cads and silver-spoon effete gentlemen embarking on a romantic adventure together, the clueless ‘uppa class’ pair first get taken down a notch by Miss Hardcastle’s cousin “booby”, the original Slacker Momma’s Boy Gone Bad, Tony Lumpkin, played by David Fynn in an award-worthy, scene-stealing performance. A John Belushi precursor if ever there were one, filthy, drunken, cow-eyed, conniving Lumpkin plays a joke on the visiting “townie” duo, upping the ante on mixed up identities, jewel theft, elopement and doubting fathers spying on steamy romance scenes from behind sofas. 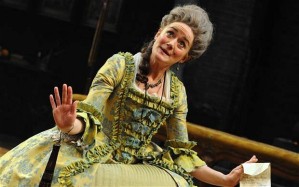 Adding to the broad social commentary mayhem and marital mosh pit melee, celebrated, veteran stage actors and masters of comic delivery, Steve Pemberton and Sophie Thompson (Hardcastle, himself, and Mrs. Hardcastle) explore every befuddled, bourgeois moment director Lloyd offers them with the fully committed skill, style and polish only actors of their acumen can muster. The ensemble of family retainers and assorted rough hewn, rural servants dance rakishly in and out, humming and singing and banging on the cookware for instrumentation at scene changes. They add a  fun, funky, inebriated air to the madcap undertaking. The legendary craftsmanship of the National Theatre’s design team shines throughout, creating a looming, evocative reality onstage that pleases equally well in film close-up. From the craggy, slightly askew Hardcastle manse great room with a magnificent, fully functioning fireplace ablaze at its center to a spooky, night-time forest trek, lit only by candle and lantern, the actors and audience are completely transported into a unique world reality envisioned by a solitary Irish playwright in 1773. Mark Thompson (Set Design), Neil Austin (Lighting Design), Ben and Max Ringham (Sound and Music), David Shrubsole (Music Director), Ann Yee (Movement Director).