“We are not fucking Neanderthals!”  exclaims the character Veronica in Dallas Theater Center’s production of Yasmina Reza’s “God of Carnage”, running through June 17 at the Kalita Humphreys Theater. Hard to tell they aren’t Neanderthals from watching the belabored, lowest common denominator production piloted by Associate Artistic Director Joel Ferrell, where relationships unfold with the subtlety of baseball bats thumped across the skull. Reza may not be the deepest thinker as playwrights go, but nuance and subtlety do appear in her work, “God of Carnage” included. The production feels as though someone instructed Ferrell to go full speed for the big laughs, as Dallas audiences aren’t sophisticated enough to appreciate the play’s finer points. Guess we’re all just “fucking Neanderthals”? 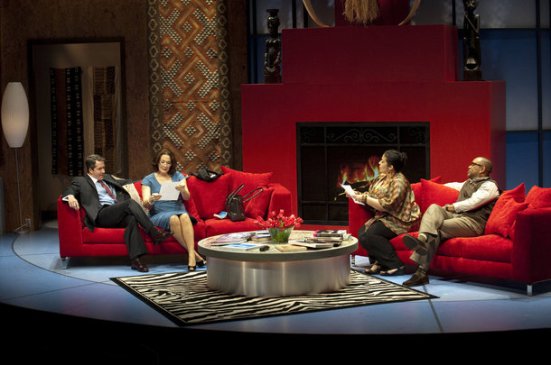 Major transitions in this play in one act spring from three incidents of exceedingly bad manners that contradict the four characters’ paper-thin veneer of “civilization”: projectile vomiting, disposal of a cell phone in a vase of tulips and the strewing of said tulips about the living room, and the responses these actions engender. The valid humor of the play arises from the actions’ surprise impact in contrast to the characters’ churlish pretensions to sophistication and their utter inability to escape the reality of their baser natures, emergent over the course of an evening. This production focuses on the actions as farce bits rather than revelatory catalyst and even ups the “hyuck-hyuck” ante: adding a second vase of tulips to strew about (in case the first one didn’t generate enough laughs) and the vomitus projected looks like hefty chunks of Styrofoam, big enough to choke a horse.

Yasmina Reza excels at creating well-defined character arcs that work in symphonic harmony, leading an audience down unexpected pathways, allowing a play’s conclusions to unfold delicately. It’s as calculated as anything Albee penned and should coalesce as effectively by nuanced degree. DTC’s production bulldozer obliterates any delicate nuance in character development. None of the four actors explore the full potential of their characters as written, and the couples sure don’t behave like longtime married partners with pre-teen sons.

Chris Hury, as cold-blooded attorney Alan, enters telegraphing the full brunt of his character like a mustache-twirling melodrama villain, waving his cell phone about defiantly from the moment he steps on stage. In spite of his excellent comic delivery and timing, best in this cast, he never has any place to take Alan as a result. His character feels almost like a reprise of the unsavory one he last played in WaterTower Theatre’s “August: Osage County”, down to the same, or similar, dark business suit as costume. The age issue, that mastodon lurking in the room? Hury was not cast originally, stepped in when the first actor got a out of town engagement. Hury can work believably as the father of an eleven-year-old boy, but as a man with another child from a previous marriage? Was he 14 when he married wife #1? Cast as Hury’s current wife Annette in “God of Carnage”, regional leading actress Sally Nystuen-Vahle looks, in costume, hairstyle and demeanor, old enough to be his mother. Hury can’t help his youthful presence and visage, and he’s a dynamic actor. Hard to believe in him as Nystuen-Vahle’s husband, when one can picture actors like Chuck Huber, Van Quattro, Bob Hess or John Davies far better suited to it with mature gravitas and presence for this production.

Nystuen-Vahle normally commands the stage with power, ease and grace, embracing her character’s challenges with zest and depth. Stiff and hesitant in movement, even occasionally mumbling and hard to understand, she seems uncomfortable here, disengaged from her role. At one point she struggles distractingly downstage, trying to shove her feet into high heels. It’s hard to tell if the awkwardness exhibited belongs to the character or the actress. Out of place and time with the stage moment at hand, her distracting discomfort neither furthers the plot nor helps illuminate her character. An odd performance for the multi-talented Nystuen-Vahle.

Hassan El-Amin and Christie Vela play the second couple in the comedy. Again, their portrayals offer no intriguing revelations or depth of character, as carefully written by Reza; instead they project a rushed sit-com type of superficiality focused on playing up the incidents of bad manners as Being Funny. Vela’s character Veronica has difficulty dealing with alcohol; the text indicates she probably should not drink. Her interpretation, as directed, dos not show the audience why. El-Amin performs the role of Veronica’s husband Michael as a sort of closet Archie Bunker, more pitiful than savage, unthinking and lamely hen-pecked rather than quintessentially amoral. Choices were made; some of the region’s finest actors don’t give a level of performance they are capable of, presumably to keep the “fucking Neanderthal” audience laughing. John Arnone’s carnally-alluring set creates a playful comfort zone where savagery can run amok behind the pretentious  coffee table art books and crystal vases of tulips.