Does Macbeth project as Rambo or Gordon Gekko?

This is not a trick question. 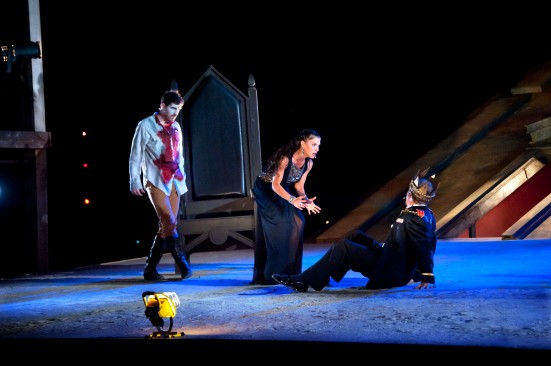 In Shakespeare’s tragedy “Macbeth”, an injured sergeant describes the title character’s conduct on the field of battle early in the play:

Disdaining fortune, with his brandisht steel,

Which smoked with bloody execution,

Carved out his passage till he faced the slave;

Which ne’er shook hands, nor bade farewell to him,

Till he unseam’d him from the nave to th’ chops,

And fixt his head upon our battlements.”

Bob Lavallee, that regional master of genius set design (Dallas Theater Center’s “Joseph and the Amazing Technicolor Dreamcoat” and “Cabaret” designs, to name two), injected new life into the Samuell- Grand’s Amphitheatre space, creating two massive interlocking raked platforms that tilt the play’s world at odds with reality along with the audience’s perception of it.

Downstage floats an expanse of sand-covered open space with the sole permanent element a Stonehenge-inspired round dining table that converts to a giant cauldron stage left. Upstage, jutting away from the audience at a precarious angle, sits the faded façade of a timeless stone building with multiple arched portals that gape like unworldly maws. Light and sound spills through them onto the open expanse below, as characters use them for battle or boudoir entrance and exit, alike. An intangible horror remains ominously hidden, left to blood-curdling imagination, in Lavallee’s massive, dream-like design, enhanced by light and sound. It hints at terrified madness, lying in wait for the players to enact its dismal mayhem. (Light design, sound design/ composition: Driscoll Otto; Bruce Richardson)

This production’s problem lies with its Macbeth and his interpretation of the role in accord with director Novinski’s wishes. Chris Hury is a talented, skilled actor, one of our region’s finest.

His performances have excelled on numerous stages — but not here, not as savage warrior chieftain becoming unhinged tyrant. A slight, slim man, Hury does not normally manifest a physically imposing presence on stage. He, in no way at any time, embodies the raging force of nature in battle Shakespeare’s wounded sergeant describes Macbeth to be, as quoted above. No freewheeling, out of control “Rambo” energy informs his performance, which strips all mounting dramatic tension from the play. Instead, he seems to reach for an internally motivated, manipulative Michael Douglas as Gordon Gekko-style usurper, as directed by Novinski. Frequently he speaks so quietly he seems to be waiting for a close-up camera shot. He tosses off Macbeth’s soliloquies, recognized as defining moments of transition and flailing self-actualization in the play, with flat ennui. Lean in close or you may miss them entirely. His Macbeth’s relationship to Lady Macbeth, his dominant life partner and inspiration in crime (fired with sensual desire, as written) seems disengaged, barely reacting to the sad news after her suicide. Hury huffs and puffs noisily into his microphone occasionally, but the witches’ prophecies barely seem to haunt him as they unfold and never drive him into explosive frenzy. His response to the appearance of Banquo’s ghost at the dinner table looks perfunctory and blocked, not consumed with horror as a manifestation of massive guilt or warrior’s PTSD trauma. Rambo or Gekko? It’s clear which monster icon Novinski must prefer.

Other elements disappoint as well. Fight and movement choreography by Lloyd Caldwell misses the mark often. In the play’s culminating combat scene between Macduff (a gritty, muscular Aaron Roberts) and Macbeth, the men inexplicably drop their swords and begin a bout of fisticuffs, like two boxers sparring gingerly in a ring, snuffing out any real dramatic arc. The play’s program indicates no specific location or time period, but the 21stcentury attire (modern suits, contemporary dinner dress, Iraq-style camouflage uniforms) suggests a Middle Eastern re-imagining of some sort.  (Costumes –Amy Pedigo-Otto) How disappointing to see the witches costumed and directed in a conventional, caricatured manner, wringing their hands, slinking about “wraithlike” and harping like cartoon hags. At least they won’t need to change clothes to celebrate Halloween. At the final vision scene at the cauldron, director Novinski has three small children pop up from inside the cauldron to deliver prophecies to Macbeth while the witches skip around them, in keeping with stage directions from one Folio. The scene should terrify, sending Macbeth off the deep end and chilling the audience to the bone. Instead, children’s high-pitched, squeaky delivery and limited ability to act with convincing impact assaults the audience. The scene should NOT make audience members giggle.

Still, there are fine moments and performances in this production. Steven Young embraces King Duncan’s character with potent theatrical bear hug and grand bearing palpable to every audience member. He doesn’t merely own the stage; he owns the park. (When will some regional company produce “King Lear” with him?) Marcus Stimac creates an acceptable Banquo as a warrior of principle (except when mugging ghoulishly in red paint stained over shirt). In spite of receiving the scantest notice from Hury’s Macbeth, hence having little to play to, Joanna Schellenberg makes a compelling, tortured, dignified Lady Macbeth. She infuses the play with her tragedy’s sorrow, effectively communicating her deepest desires while careening down guilty ambition’s bloody path. Austin Tindle brings dramatic depth and genuine spark to the young noble Malcolm, King Duncan’s son and true heir to the throne. His revelatory scene interrogating Macduff arrives as the commanding high point of Act II.  Tindle’s Malcolm lets the audience feel the genuine, compassionate king he will become with clarity and focused engagement, in contrast to Hury’s mumbling, scheming, emotionally distant Macbeth.

Several companies have produced “Macbeth” in this region over the past few years. Shakespeare Dallas presented a more impassioned, exotic version in 2007, with David Fluitt in the title role. In 2011 Dallas’ Kitchen Dog Theater mounted it with Christopher Carlos as a surly Macbeth. TCU’s Trinity Shakespeare Festival selected it for last year’s tragedy, featuring nationally acclaimed Richard Haratine and terrifying witches.  Earlier this year, Sundown Collaborative in Denton produced a vigorous, bare bones adaptation by R. Andrew Aguilar, with the adaptor as Macbeth. Each production has had its strengths and shortcomings. As a superb work of art, one of Shakespeare’s finest, the tragedy “Macbeth” continues to intrigue artists and engage audiences. There is something worth appreciating in each production, including Shakespeare Dallas’ current version. Quibbles aside: go.

“Out, out, brief candle!

Life’s but a walking shadow; a poor player,

That struts and frets his hour upon the stage,

And then is heard no more: it is a tale

Told by an idiot, full of sound and fury,

And telling us much about the nefarious  aspirations of cold-hearted men.

A sample of reviews from previous productions:

One thought on “Rambo or Gekko? Shakespeare Dallas Does “Macbeth””