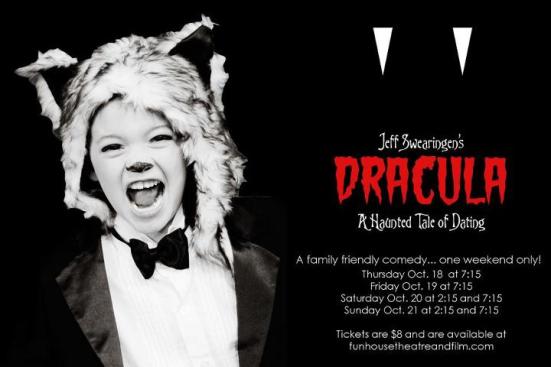 Bram Stoker, eat your heart out!
Zoey Smithey as Hound of Help

Every so often they let him out of his dank, dark dungeon. The primordial skeleton key releases the rusty lock, and the immense door creaks open wide its gaping maw. That Duke of Demented Depravity, Dean of Dastardly Jokes and Spinner of Ripping Yarns emerges to unleash another fractured, harrowing hash-up of classic literature upon the stage, assisted by a gimlet-eyed band of pre-teen and teen thespians. It’s Jeff Swearingen and Fun House Theatre and Film’s crew of fearless hench-lads and lasses. Get ready to howl with the agony of hilarity.

This time Swearingen assaults the Transylvanian Tyrant of Terror, Count Dracula. It’s a view of the Count you’ve never seen before. “Dracula –A Haunted Tale of Dating” recounts a sad, Gothic tale of the lonely, lovelorn vampire on a quest for a girlfriend.  Since he hasn’t dated in 400 years, he’s lost the “knack”, so to speak. Who guides him along the thorny path to romance?

Charles Dickens’ Miss Havisham, Ozzy Osbourne, a leering, lisping Van Helsing in Viking helmet and Lederhosen, the world’s cutest, blood-thirsty “Hound from Help”, a Vampire Valley Girl Lucy with three smarmy suitor stooges in hapless pursuit, that “disgusting” ruffian Renfield, a Fairy Godmother attired in baby blue gauze, Mina the opportunistic, heartsick ingénue, and the most unlucky man in the world — feckless, sad-sack, Jonathan Harker. And several other demonic denizens of Swearingen’s twisted imagination that add lashings of levity to the screwball scenario. Children audience members giggle with spontaneous glee at perfectly timed and executed pratfalls; grown-ups roll their eyes and groan with painful delight at the “adult” behavior parodies and droll cultural references that fly past their kids’ heads. A good time to be had by all, indubitably, Mr. Watson….

Leads exude well-rehearsed ease and confidence in on stage delivery and characterization not always evident in adult “professional” performances: Jasper Murphy (Jonathan), Riley Flores (Mina), David Allen Norton (Dracula), Marisa Mendoza (Lucy), Alex Duva (Renfield), Doak Rapp (Van Helsing). The supporting ensemble works smoothly together, with each member shining brightly in his or her special stage moment. This cast fully supports each other, comprehends the script and trusts playwright/ director Jeff Swearingen implicitly. Nobody else achieves this superior a level of theatrical veracity in children’s theatre in the metroplex. Joseph Cummings’ romantic, period-hinting set reflects an earthy, storybook-like charm and provides imaginative backdrop for the simple proscenium space. Costumes reinforce characters’ actions and moods or enhance the parody motif in keeping with the script’s intentionally florid style (costume mistress – Bren Rapp). It’s a short run. Fire up your broomstick or hitch that pumpkin coach and four and get there before its goose is long past cooked. Irreverent, but family friendly. Will sell out.

Photography is by Stacy Murphy

One thought on “Lovin’ that Overbite of Mine: Dracula at The Funhouse”