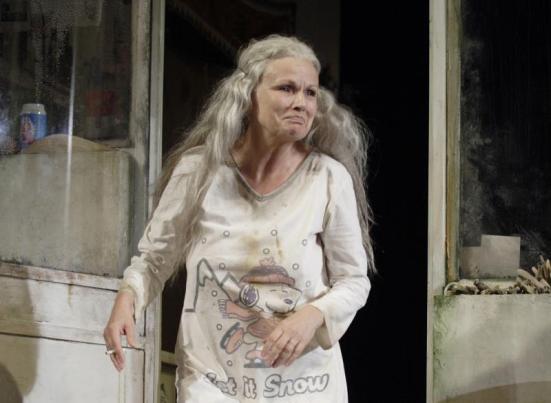 Julie Walters as Judy in “The Last of the Haussmans”

“My baby’s home! Let’s wake ’em up! The old rebels, eh? Let’s show this younger generation what it’s all about! Shall we get naked?“— Judy, in “The Last of the Haussmans”

Tightly wound — an understatement? More like a British version of Tracy Letts’ “August: Osage County” on crack cocaine. If you’re a fan of Letts’ Tony and Pulitzer-winning stage epic set in Oklahoma, you’ll most likely adore this screening. Beresford weaves a fascinating web of family dysfunction that brims with ice and fire and soars with a glittering tangle of dissipation, deception, lost hope and transformation. Tawdry and debased in its broken-down-home setting, this multi-generational human drama transcends everyday squalor with lyrical elegance. Its six characters tumble through a swirling emotional vortex, giving each actor rich opportunity to explore internal nuance and layer upon layer of relationship. Each follows a challenging, expressive arc through a metaphorical rebirth of hurricane force. A surprisingly tender kiss scene in Act Two reveals a hint of Tennessee Williams-like poignancy. As the play ends wordlessly, anti-climactically, the characters’ will to thrive spills vibrantly off the screen and sends an awe-filled audience out into the night breathless and energized, tingling from the experience. Some scenes could use a careful edit for length; but as first plays go, “The Last of the Haussmans” is the real article. It earned a 5 Stars rating from the Sunday Telegraph and 4 Stars from Daily Express, Daily Mail, Evening Standard and The Times reviewers.

BAFTA, Golden Globe and Olivier Award-winner Julie Walters drives the plot as aging 60’s hippie rebel Judy, a nostalgia-consumed and sometimes drug-ridden family matriarch in decline. Her performance alone is well worth the price of admission. 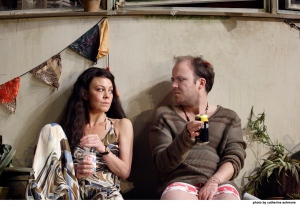 Dates and times for Dallas and Plano:

Actor Julie Walters in conversation about her role in “The Last of the Haussmans”: