They say the whole is greater than the sum of it parts…. 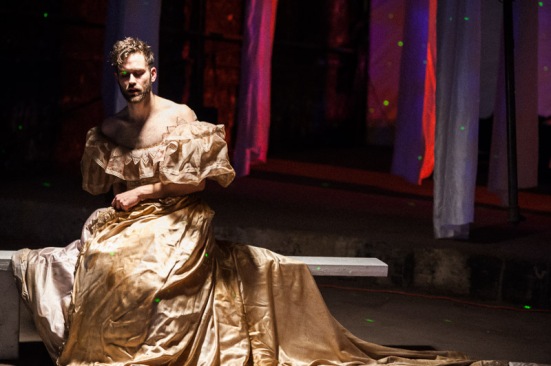 In Thomas Riccio’s new progressive symphonic theatricale, “W(hole)”, playing at his decadent sprawl of a reclaimed warehouse in West Dallas through December 22, the adage rings true as a Tibetan gong.

Taken apart, as in autopsy, it strains and fragments, laments and groans, lashes out with sexual angst and sweaty frustration. Screens scatter randomly throughout the candle-lit landscape,  showing 1960’s home movie family holiday clips over and over, backwards and forwards, excerpts from a Fred Astaire dancing extravaganza and unrecognizable black and white action films.

Romance goes awry, as in soap opera organ-chorded throughout.

Riccio’s signature abused, lovelorn women and macho, emotionally unavailable, raging men emerge from dark corners to shout and gesticulate, cling with desperation and fall apart in isolation and recrimination. Spectre-like, they retreat back into the shadows or behind gently swaying ghostly drapes.

Love partitions as in by guillotine.

Eerie catacombs for the catatonic.

No product placement. No commercials. Cameras and smart phones welcome.

Scenes ebb and flow as the audience floats along, adrift, overwhelmed by a Philip Glass-like cacophony of images and sound. Sensate, intemperate immersion.

Seating on benches is hard; the space grows chilly as evening progresses.

Open your heart, mind and soul to the w(hole).

Written and directed by Thomas Riccio with a fine-tuned ensemble of performance artists, the Dead White Zombies, and one inscrutable, lurking Beast.

One thought on “Dig this W(hole) Deep: Dead White Zombies”