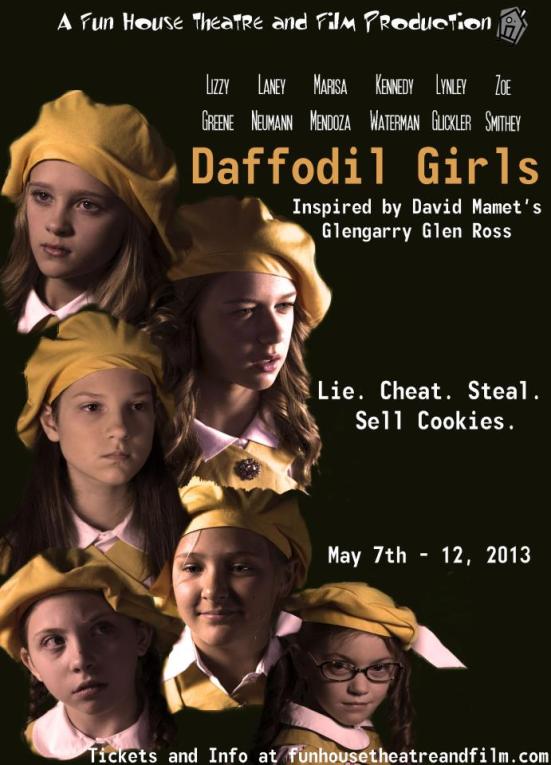 Youth theatre with a raw edge? Find it by the compost heap-full at Fun House Theatre and Film in Plano. Performing through May12th, this Sunday, Jeff Swearingen’s cadre of talented, dedicated mademoiselles present Daffodil Girls, his comic parody adaptation of David Mamet’s celebrated drama Glengarry Glen Ross and come out Olympic champs. Swearingen turns a hard-edged, macho, vicious war for power in the real estate world into a hilarious battle for a “Birthday Party with a Pony” through the competitive world of cookie sales, via the “Daffodil Girls” organization, replete with Girl Scout style uniforms, jaunty caps and badges. Keeping Mamet’s rapid-fire, aggressive-toned, overlap dialogue intact, the nine-girl ensemble hits every high note and funny bone in the adapted script. And then some. Every character follows a clearly defined arc with believable mix of pathos and comedy. Under Swearingen’s skilled direction, his cast grasps the sense of playing hyper-realism (not the troupe’s usual métier) but never loses any sense of the dramatic. Or downplays the funny.

If you know Mamet’s work, you may wonder about the foul language in his scripts. Swearingen utilizes substitutions that get the point across effectively while not forcing pre-teens and teens to say words we all hope they might “miss” in their social education. Their characters explore power and aggression and the concept of winning at any cost without becoming poster kids for ‘potty-mouth’. It’s clear at the end that crime doesn’t pay, and lying only makes it worse. Nobody gets to have the Pony Birthday Party this year, not in this Daffodil Patch.

Go to www.funhousetheatreandfilm.com for tickets, info.