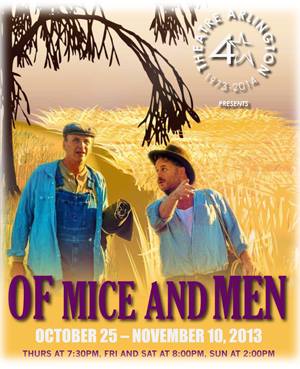 Van Quattro, Elias Taylorson in “Of Mice and Men”

Transforming major novels into viable stage plays presents challenges for adapters and performance companies, alike. Aside from the need to condense entire chapters into scenes without  making the play appear like a Cliff Notes version, preserving the tone and voice of a novel in stage form and delivering the conflict/resolution aspects of viable theatre within 200+ page “character arcs” present daunting tasks that often fail. Theatre Arlington’s current two-act production of John Steinbeck’s novella Of Mice And Men, adapted for the stage by the author, proves that a satisfying result is possible.

This work manifests as a classic on-the-road buddy play with a determined nihilistic perspective. Two protagonists help make it unique and appealing. Short in stature George, a hotheaded ne’er do well and transient farm worker/ ranch hand with a Utopist vision and lumberjack-massive, tall Lennie, George’s brain-damaged cousin and constant companion, make a compelling duo against which the play’s conflicts, themes and social issues get worked out in a plainspoken, dramatic manner. Inseparable and devoted as they are, each functions as the other’s Achilles heel as the play descends to its heart-breaking, grim conclusion. Plenty of grand dramatic fodder here…for the right actors, in the right production.

Theatre Arlington’s production features two of the region’s strongest dramatic actors in an ideal visual pairing, Elias Taylorson and Van Quattro as George and Lennie. The play opens with the duo camping out at night before heading to work at a Salinas CA ranch. Taylorson and Quattro immediately define their characters with detailed focus and natural fluency that establish their unusual mutual dependency as eminently believable. Their skills imbue the carefully crafted artistic work with a gritty, accessible sense of realism. Steering clear of stereotype or film icon mimicry, each actor makes his role “his own”, and together they maintain a fine dramatic balance throughout the production. The supporting ensemble of eight works admirably to follow the play’s arc, reinforcing the naturalistic tone, image and suspense that still speaks at a high literary artistic level.  Each character in the drama has a distinct role in fostering or destroying George’s dream through response to Lennie. Dennis Raveneau as the African-American character Crooks follows the clearest arc of transformation, in a fairly brief scene; another superior actor adept at playing layered nuance, Raveneau allows his character’s encounter with the culturally disaffected Lennie to smoothly catapult him from alienated bitterness to  hopeful transformation without any sense of contrivance. Kit Hussey gives a dignified, palpably stirring performance as the sad, defeated old man Candy, the most sympathetic role in the play. Again, he eschews stereotype in living through a private Hell and finding fresh inspiration in George and Lennie’s vision of a utopia. There is no happy ending to this work, not for anyone; but all performances work well together to convey the triumph of the human spirit, the need to survive and thrive against all odds.

At times a director’s guidance seems hard to sense from watching this production; but credited director Melanie Mason stepped in as a substitute. This was not her production from conception, so perhaps her delicate touch respects the play and assembled cast in the most efficient way possible. The set by Tony Curtis, lights by Bryan Stevenson and sound design (fabulous crickets) by Jordana Abrenica evoke rural central California well enough to make me genuinely homesick for that world of bucolic pastels. Costumes, by Meredith Hinton, help define each character clearly and lean towards the literary and romantic rather than the naturalistic, making a pleasing dramatic picture where the work’s artistry thrives without ill-placed presumption of hyperrealism. Theatre Arlington’s production of John Steinbeck’s Of Mice And Men is an appealing, thought-provoking, lively work of performance art that reflects well upon its literary genesis and honestly earns its audience’s standing ovation at conclusion. The solid ensemble includes: E. Scott Arnold, Parker Fitzgerald, Nikki McDonald, Gabriel Whitehurst, Eugene Chandler and Gregory Alan Cooke.