“What do you see? Nothing else exists….” 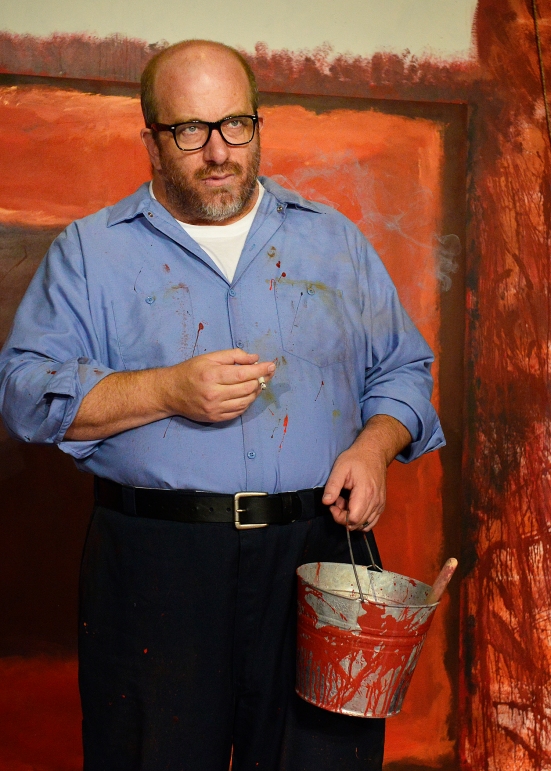 The idea of anyone writing a dynamic stage play about a famous abstract expressionist painter from the 1950’s that a non-academic would want to read might inspire skepticism and yawns. Producing it in a way that communicates its protagonist’s creative process and philosophical intentions effectively as it soars through a complex path of intense conflict and resolution, while holding the audience spellbound and weeping, could provide a dubious challenge. Start out in medias res, in the middle of the artist’s life arc, and place the audience in his studio. Oklahoma City Repertory Company took on the former — John Logan’s celebrated Tony Award-winning 2009 play “Red”, about the major turning point in American painter Mark Rothko’s life, with bold vision.  “City Rep” accomplished the latter by re-creating the painter’s 1950’s New York City Bowery studio in exquisite detail on Oklahoma City’s Freede Little Theatre in the Civic Center Music Hall (scenic design, lighting and sound by Ben Hall, Kathryn Eader and Will Burns and Steve Emerson) and eliminating the fourth wall. It placed its rapt audience among imaginary, just finished paintings, as if seated in the middle of Rothko’s studio space. The audience didn’t merely watch an intellectualized bio-drama with discussion of Dionysian v. Apollonian art from a safe distance; it became immersed in Rothko’s tortured creative process, a breathlessly amazed participant in the intimate life drama of operatic proportion unfolding on stage.

“You have been weighed in the balance and found wanting.” 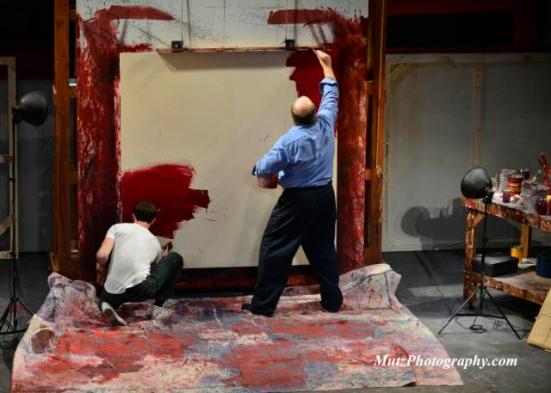 Stage and screen legend Alfred Molina played Mark Rothko in the London and Broadway productions, winning a 2010 Drama League Award for Distinguished Performance. Eddie Redmayne won a Tony in the Best Featured Actor in a Play category for his portrayal of Rothko’s assistant Ken. As the irascible, sentimental, pugilistic, manic-depressive, Renaissance man of an artistic genius Rothko, City Rep cast D. Lance Marsh, an artist and cultural leader of esteemed gravitas, himself. Artistic Director and Head of Performance at Oklahoma City University since 2007, Marsh has guided theatre department growth from 35 students to 200 during his tenure. In 2008 OCU honored him with the university-wide “EXCELLENCE IN TEACHING” award for Full-Time Faculty. Marsh serves as Associate Artistic Director for Oklahoma Shakespeare in the Park and works as an Affiliated Artist at City Rep. When he opened the production of “Red” as Rothko, superciliously barking the question “What do you see?” at his new, youthful studio assistant Ken, Marsh brought a palpable natural reality to the role of artist-in-command. He’s an actor as sure of his creative process and dynamic role in the region’s cultural milieu as the artist he portrayed. Struck speechless by the sheer force of the words spat at him, Aaron Wertheim’s Ken squirms under such potent scrutiny, revealing the predictable insecurity of a much younger man, not accustomed to having to think so fast, as deeply or as expressively as the tyrannical Rothko requires. Now based in Chicago, Wertheim graduated from OCU in 2012, where he studied at length with Lance Marsh. The two men revisited their mentor-student relationship (trusting, not confrontational) in developing Rothko and Ken’s turbulent one, and it paid off. When they flip up a freshly stretched blank canvas and start freely applying a red-hued undercoat together, they communicated an innate familiarity born of a practiced relationship with honest symbiosis. Wertheim’s Ken grows realistically in confidence and comprehension across the play’s arc, in spite of the browbeating he endures from Rothko. At play’s end Wertheim reveals Ken as a full-blown confident artist, a richly informed, keen-eyed man, shaped by the searing fire of Marsh as Rothko’s stern tutelage.  What a delight to watch these two fine actors play together. 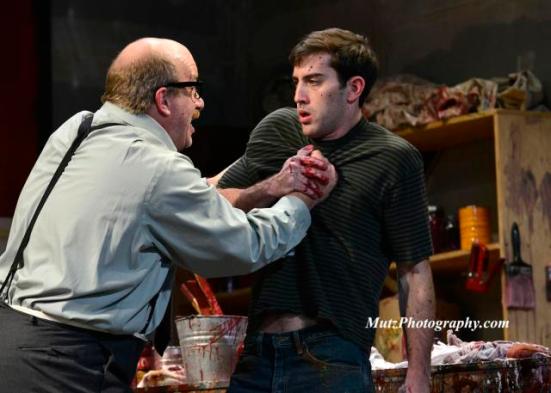 “Not everyone wants art that actually hurts.”

At play’s end, Ken turn’s Rothko’s words back on him. “What do you see?” he insists, with ironic intent. City Rep’s audience saw a great artist fading into decline in dark silhouette, hauntingly framed by a painting backlit in pulsing, vibrant red. They saw Ken, symbolizing the future, stepping out of the dim-lit studio into light, a Monarch butterfly emerging from chrysalis. 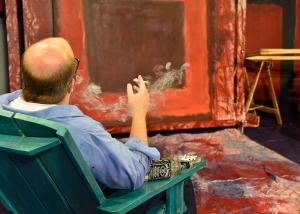 Versions of this review appear on TheaterJones.com and in  Oklahoma City’s The City Sentinel, in print and online.