The cast of Oklahoma City Repertory Theatre’s The Grapes of Wrath, adapted by Frank Galati

“A different time is coming.” Folks moved on if they wanted to survive. Beginning in 1930, the Great Plains region entered an era of extreme drought, which combined with widespread unsustainable farming practices to create a massively destructive, widespread dust storm phenomenon designated “The Dust Bowl”. By the end of the 1930’s, more than 75% of the region’s topsoil had blown away. On May 9, 1934, a two-day dust storm swept across the Great Plains, depositing12 million pounds of dust from Chicago to Cleveland, Buffalo, Boston, New York City, and Washington, D.C. As a result of the environmental destruction to the Great Plains states, over 500,000 Americans became homeless. Many Oklahoma residents perished of dust pneumonia and starvation. Crops withered and died. Banks foreclosed on farms, bulldozed homes. Folks had to move on. Between 1930 and 1940, approximately 3.5 million people migrated out of the Plains states, over 86,000 to California, in just one year. Inspired by this vast human and environmental disaster and the people’s strong determination to survive he witnessed in response, author John Steinbeck wrote his Pulitzer and National Book award-winning novel The Grapes of Wrath. Now in its 75th year of publication, the tragic tribute to the American spirit is still going strong.

“Mine eyes have seen the glory of the coming of the Lord: He is trampling out the vintage where the grapes of wrath are stored….” 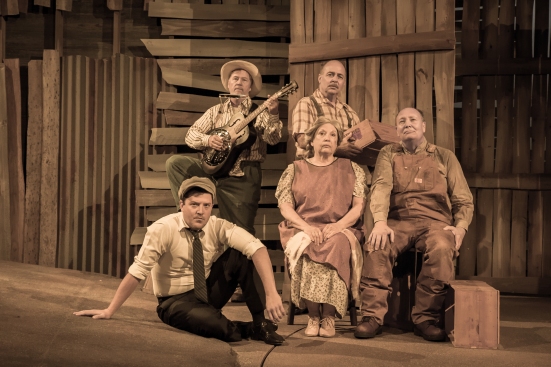 The Grapes of Wrath: The Joads and the narrator/troubadour: Sonny Franks, Michael Corolla, Pam Dougherty and David Coffee (seated), Cameron Cobb (in front)

In honor of the work’s 75th year, Oklahoma City Repertory Theatre presents Frank Galati’s 1988 stage adaptation of the novel, a co-production with Oklahoma City University and the Oklahoma Historical Society, with the blessing of the National Steinbeck Center (www.steinbeck.org). It runs through October 5 at the Burg Theatre on the campus of Oklahoma City University. Of his novel, Steinbeck reputedly said, “I’ve done my damndest to rip a reader’s nerves to rags” in portraying the downward-spiraling migration of the near destitute Joad family during their demoralizing trek from Oklahoma to California. What a challenge to take a 495 page realistic novel of episodic devastation and turn it into a viable stage play; Galati’s adaptation won the Tony Award for Best Play in 1990. The City Rep/OCU production brings it to vibrant life with humble dignity, one that portrays the intense reality of the Joads’ suffering while conveying the noble veracity of their uniquely American survival spirit.

Jason Foreman’s austere, one-level thrust set uses a center revolve to convey the journey’s passage, with rustic flats back-lit in silhouette, framing the action. Key moments evoke a timeless Norman Rockwell-style world (more expressionistic than romantic). The Joads trek slowly across the Southwest as the revolve rotates, with13 people initially crammed into a tired jalopy of a dilapidated farm truck. The truck symbolizes their determined desperation as much as acts as their mode of transport. Upstage left, hand-painted, dimly lit road signs set locale for an audience that might otherwise lose physical sense of the 2000 plus mile journey. Actors open traps in the stage floor to gather around flickering campfires; larger trap doors unfold simply for gravesites or the play’s river bathing scene. The production unfolds with simple grandeur, allowing Galati’s adaptation to usher the audience deep into the homespun world and sweeping imagery of Steinbeck’s novel.

The incorporation of professional actor/musician Sonny Franks as narrator/ troubadour/ musical director provides a worthy bonus for this production. The Frank Galati script includes incidental music. City Rep’s Director Harry Parker set the incidental music aside and worked with Sonny Franks to underscore the entire script, as if he were scoring a film. Sonny wove in excerpts and snippets of at least twenty-two well-known songs, mostly a mixture of Woody Guthrie and 1930’s era gospel tunes. He essentially composed a unique score for the entire show, at different times playing a 6-string guitar, 5-string banjo or a 6-string banjo, upright bass, mandolin, saw, harmonica, dulcimer, dobrow or a child’s player piano. His accompaniment adds another level of historical realism to the production as well as a pervasive freshness and vitality, reinforcing the determination of the Joad family to prevail against adversity.

If you’ve read John Steinbeck’s The Grapes of Wrath, you will find this stage production an honorable, entertaining tribute. If you aren’t familiar with the book, you will enjoy learning about a horrific time in our nation’s recent history and take delight in how the work pays tribute to the brave heart and soul of the American people. “A different time is coming.”

Oklahoma City Repertory Theatre presents the Tony award-winning adaptation of The Grapes of Wrath as a co-production with OCU and the Oklahoma History Center. FINAL WEEKEND! Runs through October 5 at the Burg Theatre on the campus of Oklahoma City University. TICKETS: 405-228- 5227; http://www.eventbrite.com/e/the-grapes-of-wrath-september-26-28-october-3-5-presented-by-theatreocu-tickets-12143546675?aff=eorg

All photos by Mutz Photography

One thought on “Oklahoma City Rep’s “Grapes of Wrath”: classic stage tribute to its 75th year”