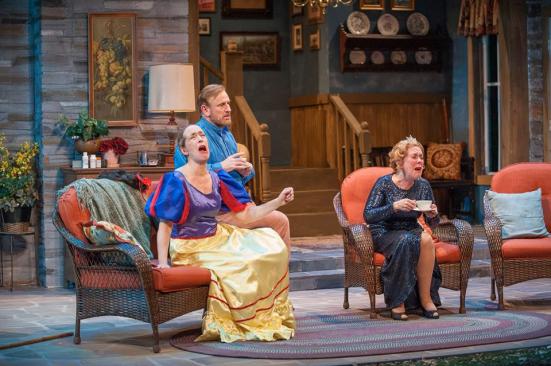 “I operate on the premise that a theatre’s job is to prevent people from leaving their seats before the entertainment is over.”

I concur wholeheartedly with Tom Stoppard, who uttered those words in a BBC radio interview back in 1970. Don’t bore me. Don’t try to fake me out with the latest cable TV-style fad or commercial generic “re-envisioning” of historical classic, drama or musical. Don’t drive me out of the theatre in numb disgust. Snap shut my roller coaster seatbelt. Send me on an unforgettable magic ride that carries me inside a world afire with perspectives that open new vistas on the human experience. What shows did just that for me in 2014? Not only did I not want to leave my seat before final curtain, I went back for a second dose when I could.

My Best of choices in regional live theatre for 2014, a Baker’s Dozen-style assortment of thrilling roller coaster rides, with the top five ranked—

1) VANYA AND SONYA AND MASHA AND SPIKE: Uptown Players kicked off 2014 with this triple threat winner. A divine, literate script by Christopher Durang; direction by comic genius B.J. Cleveland; an inspired ensemble cast including Wendy Welch, Bob Hess, Diana Sheehan, Nadine Marissa, Evan Fentriss and Julia Golder. I compared every show I saw to this production throughout the year. None matched it. What Director B. J. Cleveland says about his production: “Great script, terrific actors, and fantastic friends. The perfect combination to create a memorable theatrical experience. There was a lot of heart onstage. And I think it showed.” (Mike Morgan photo)

2) THE GRAPES OF WRATH, adapted from the John Steinbeck novel by Frank Galati: Oklahoma City Repertory Theatre found the heart and soul of this grim, episodic epic with a cast of over 40 actors, from seasoned Equity pros like David Coffee, Pam Dougherty and Michael Jones to Oklahoma City University students. Directed flawlessly by TCU’s Harry Parker with an original multi-instrument score composed and played throughout by Sonny Franks, this production portrayed the tragedy of the Dust Bowl era with a pathos and dignity that honored the American spirit and Steinbeck’s classic work in spades (and drew in Chicago and New York City-based national arts leaders to witness the production). CityRep’s Founding Artistic Director Donald Jordan remarks, “I think the kind of national recognition CityRep’s production of THE GRAPES OF WRATH has received reflects the extraordinary talent and artistry through out our region. With talent from Dallas, Fort Worth and Kansas City joining the Oklahoma performers, all working together to bring a great American and Oklahoma story to the stage. We all collaborated in telling an epic tale that resonated with audiences and our national theatre community.” https://criticalrant.com/2014/10/02/oklahoma-city-reps-grapes-of-wrath-classic-stage-tribute-to-its-75th-year/

3) THE GOLDEN APPLE: A remarkable work from 1954, like four musicals in one, with a convoluted, esoteric plot loosely based on The Odyssey and The Iliad and gorgeous through-sung music challenging its singers non-stop, at nearly operatic level. Created by a young composer/lyricist team that promised more if both had lived to a ripe age: Jerome Moross and John Latouche. At Lyric Stage, with a cast of 43 and full orchestra of 36, Director Stefan Novinski (University of Dallas) and Lyric’s Musical Director Jay Dias brought this expansive spectacle to life with love, full vitality and respect as no one has seen it since its 1950’s run on Broadway.

4) THE TEMPEST: William Shakespeare’s final play, produced as part of the Trinity Shakespeare Festival in Fort Worth, directed by scholar, humanist and consummate master of the stage T. J. Walsh.

Trinity’s elegant, austere production in TCU’s black box theatre felt like a Buddhist meditation superimposed on an exotic dream. Drawn through by an ethereal realization of Caliban by regional master actor David Coffee, I left profoundly moved, as if I had experienced a purifying visitation by angels. No gimmicky special effects or overblown scenery. Just the genius Bard laid out bare and gleaming in text and character arc. What a RIDE…. https://criticalrant.com/2014/06/27/trinity-shakespeare-2014-oh-blessed-brave-new-world/

5) STIFF: Next to no budget. Youth actor ensemble, all dedicated, aspiring to become professional. Short rehearsal time. Barely adequate venue in Plano. Jeff Swearingen’s FunHouse Theatre and Film mounts some of the FINEST youth theatre in the region, and his original farce STIFF made my sides ache with laughing. Hilarity and mishap launched non-stop with the death of a powerful theatre critic mid-view of a ghastly soap opera-style drama. Nobody let up, not once, or lost focus in spite of the crescendo of laughter they inspired, least of all the dead “critic”, who remained a “pall of a joke” on stage from before curtain until after final bows. Comedy is harder to mount than drama. Regional adult comic actors should attend the FunHouse shows to watch it work right. Fun House Founding Partner and President Bren Rapp comments: “The entire youth ensemble put the show up with record quickness, and they all excelled in their roles or production jobs. For such a short rehearsal period, the characterizations were amazingly complete, right down to a masterful physical portrayal of the dead theatre critic Mickey Blake by Tex Patrello.”

HAIR, produced by Greater Lewisville Community Theatre, Chris Robinson directing: A fresh production with honest, youthful performances. Back to its roots as an ‘experimental” style piece focused on love and self-expression. The music shook the rafters of this charming small venue in Old Lewisville and enveloped the audience in the hopes and dreams of a bygone era without crass sensationalism or reliance on contrived spectacle. Let that sunshine in, GLCT….

THE BROTHERS SIZE: produced by Jubilee Theatre, Tre Garrett directing. An ominous, literate work by Tarell Alvin McCraney, it packed an intense wallop that reflected on sibling relationship, the challenges of race and incarceration and the evil that some men do, with relentless dramatic clarity. Garrett showed again his national level talent and skill as a director in evoking a naturalistic reality with his balanced actor ensemble Rico Romalus Parker, Seun Soyemi and Adam A. Anderson. Yet the work is pure poetry and magic to the ears, almost a tone poem. Garrett comments: “It was a dream piece to direct. The work is not only challenging and inspiring, it’s extremely topical when you consider what’s happening in the country today. That’s what art should be about, holding up a mirror to society and asking us to do and be better.”

BOOTH: Second Thought Theatre mounted this historical drama by regional professional actor Steven Michael Walters and Erik Archilla and wowed the crowds with its contemporary feel. Definitely a work in process at this stage, it offers genuine promise, brimming with intrigue to match today’s tabloids and congressional indiscretions. Even better seen twice.

CHRISTHELMET: Matthew Posey bangs his loud, evocative, twisted thespian gong again with a raging original, a vaudevillian tale that careens from chaos to redemption at his Deep Ellum Ochre House venue. And satisfies the hungry critical palate like a  substantial three-course meal followed by a naughty, exotic dessert to flirt with your taste buds.

THE BALD SOPRANO: Almost nobody mounts Ionesco, and for good reason. His excesses of absurdism could make your teeth ache. Steps up University of Dallas acting professor Kyle Lemieux, presenting a ravishingly glamorous, exquisitely unapologetic mounting of Ionesco’s famous “anti-play”. Fabulous engagement by university age actors offered a rare delight for the audience from start to non-finish, in every way a titillating success. Who says “academic theatre” is always a dry, dull undertaking?

THE COMEDY OF ERRORS: This past summer Junior Players trumped all the regional pro productions of this busy, confusing Shakespeare comedy I’ve seen in the past few years, by a wide margin. Like with FunHouse’s STIFF, JP’s youth actors brought unmitigated commitment to their roles and pulled it off. It was clear. It was VERY funny. It had to be a terrific educational experience for all involved. Valerie Hauss-Smith directed The Comedy of Errors and says,“I faced my youth actors with a major challenge: remain true to the text, the essential meaning of Shakespeare’s play; but integrate1920’s-style zany, physical comedy and slapstick as embodied by Charlie Chaplin into the show’s performance. They embraced the challenge and surpassed my expectations.” https://criticalrant.com/2014/07/24/no-error-in-sight-junior-players-comedy-of-errors/

Performance of the year: Diana Sheehan in the one-woman show FULL GALLOP by Mark Hampton and Mary Louise Wilson at Water Tower Theatre, directed by Terry Martin. An astonishing transformation. Working with a bookish script that verged into telling rather than showing, Sheehan found believable moments to reveal vulnerability within the polished presentational veneer of the complex, hard-edged, ambitious Diana Vreeland. No glossy caricature or simple mimed walk-through, it was a most natural, sophisticated, complex and nuanced performance. Praise from Director Martin: “This is the thing about Diana Sheehan, she is truly a character actress in a leading lady body.  Her ability to find the truth in a character that is unlike herself is actually remarkable.  Most actors have a very hard time stepping outside of behavior that is natural to them because they feel they are being untruthful or dishonest.  Diana has this uncanny ability to not only (and I use this word in a completely positive way) mimic the behavior of a character, but also find its depth and emotional truth.” (Kelsi Leigh Ervi photo)

Emerging actor: Chris Ramirez, performing in HANDS ON A HARD BODY at Theatre Three, directed by Jeffrey Schmidt and ZOOT SUIT at Cara Mia Theatre Company, directed by Rodney Garza and Arianna Cook. A recent Baylor University graduate who has shown promise in smaller and “lighter” productions, he revealed in two very different, demanding roles that he possesses the range, depth and ability to succeed as a strong lead actor. With miles to go before he sleeps, Chris Ramirez has a bright future unfolding before him, on stage and in film. On to 2015!

One thought on “Best of 2014 On Stage: the view from Criticalrant”