Watching a production of Eugène Ionesco’s first play, The Bald Soprano, feels like what watching your own brain surgery on a hospital monitor might feel, but in a positive way. You’re very aware that the playwright toys with your gray matter in a curious and entertaining fashion. All the neurons and synapses jumble and fire in well defined but unexpected rhythms, setting off a bright fireworks display of images and words in your head. French Avant-garde genius Ionesco tends to do that; it’s what makes him a genius.

Of Romanian descent but writing in French, Ionesco wrote his “anti-play”, The Bald Soprano, in 1948, an expression of frustration at the challenges of learning English. His main characters, two couples, joust at length with the elemental absurdities inherent in the dialogue and relationships constructed in the English language primers he studied. Secondary characters, a saucy, randy maid and a loquacious Fire Chief in full firefighter regalia, add humor and depth, functioning as catalysts to drag the two main couples out of their peculiar ritualistic, repetitive ramblings. Adding dramatic tension and an oddly rhythmical element, a chiming clock and doorbell seem as alive as the characters they send into frenzied response. You find yourself laughing without exactly knowing why. You grow more intrigued as the play unfolds to its most appropriate and utterly satisfying, absurd ending. 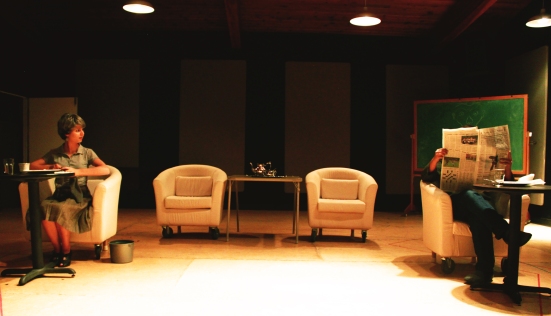 The University of Dallas production, directed by Associate Professor of Drama Kyle Lemieux, unleashes the sophisticated bizarre unreality of The Bald Soprano on its audience with assurance, commitment and solid artistry. Very few guideposts of linear logic exist in this script for young, inexperienced artists to rely on. Non sequitur cascades upon non sequitur so fast and hard you can barely count them, but Lemieux’s student cast seizes every opportunity to develop each scene with an edgy, focused confidence akin to playing improvised jazz riffs. You don’t know where this intrepid cast is taking you, but you’re sure you want to enjoy the ride. It’s a fine ensemble performance, even and balanced from all on stage. James McGregor’s Fire Chief offers robust surprises and an unexpected, tender soulfulness that might amaze playwright Ionesco, himself, if he were alive to attend today. I highly recommend this production.

Informative talkbacks with director and cast after every performance.

The Bald Soprano continues its run November 11 through 15 at 8pm, at the Margaret Jonsson Theater on the campus of University of Dallas in Irving. (1845 E. Northgate Dr., Irving, TX 75062)

One thought on “Marvelous Mayhem: “The Bald Soprano” at University of Dallas”