Tony Awards, 1977: Annie sweeps the musicals category. Michael Christopher’s Pulitzer Prize in Drama winner The Shadow Box, about death and survival, beats out the nominated Ntozake Shange’s For Colored Girls Who Have Considered Suicide When the Rainbow Is Enuf, Simon Gray’s Otherwise Engaged and David Rabe’s Streamers in the Best Drama category. The Shadow Box’s Gordon Davidson wins the Tony award for direction, over Ulu Grosgard, directing David Mamet’s American Buffalo and Mike Nichols, for his direction of Comedians and Rabe’s Streamers. The Shadow Box is a worthy play and packs an evocative emotional wallop with lasting impact. But, after viewing L.I.P. Service’s production of Rabe’s Streamers, running through August 29 at The Firehouse Theatre in Farmers Branch, one wonders if the right drama won the Tony award that year.

Streamers is a war play, set in the Vietnam era. It takes place in a stateside barracks housing three naïve, ungainly recruits. There are no guns fired, no soundtracks filled with grenades exploding while fatigue-costumed actors duck special effects bombs as they crawl through faux dense jungle in pursuit of “Viet Cong”. It follows classic, clean Aristotelian unities of action, time and place in a gritty modern reality expressed through vivid, visceral, yet eloquent dialogue. Simply, stealthily, unobtrusively, it portrays war’s impact on men and the devastation it can wreak on a cascading Homeric scale, surging to an empty stillness with a cathartic crescendo of destruction and emotional trauma. Fate and chance drive the plot in equal measure to psychological effects exploding onto unwary innocents as an unstable recruit’s random acts of senseless violence serve as catalyst for the devastation witnessed. At close, one is left numb with horror and sadness at the tragic outcome, reminded of the omnipresent truth of General Sherman’s remark “War is Hell”. One may ponder why humans need to wage war, when communication and tolerance could serve humanity so much better. We are all “beautiful streamers” in this life, leaping into existential freefall with war’s parachutes that don’t open, as the song sung by a character in the play, begetting its title, describes. 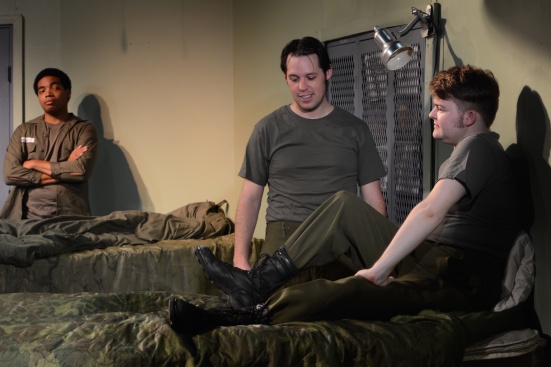 Fort Worth based director and educator Seth Johnston assembled a solid cast of regional actors who work together as smoothly as a well-established ensemble for this production. Johnston keeps the play’s pace clipping along without feeling rushed. Individual performances follow clear arcs and find the essential truths in each character. The three recruits almost never leave the stage; each actor portraying them maintains a believable functioning reality, carrying on everyday business without ever pulling focus from the plot-driven moment at hand. Kyle Lester as ingenuous college grad Billy, John F. Rutherford as mostly uncloseted Ritchie and Kwame Lilly as unflappable, common sense Rodger seem like rambunctious high school teens spending time at a military-style summer camp when the play opens. They squabble, tease and berate the unapologetically gay recruit (often cruelly), goof off, or work out private fantasies of what it might mean to “be soldiers”, like siblings. The intrusion of three characters that careen the play into dark dimensions shatters their dorm-like normalcy. Tall, agile Henry Okigbo as troubled recruit Carlyle effectively interjects an air of aggressive imbalance into the relative tranquility of the barracks, bursting in at inappropriate times and exhibiting increasedly hostile, delusional behavior. 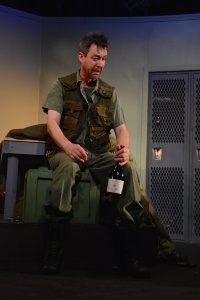 David Kersh as Sergeant Rooney and Pat Watson as Rooney’s combat comrade Sergeant Cokes master the play’s most difficult acting challenges with palpable ease, shoving the realities of warfare’s impact directly into the recruits’ faces. Adrift in alcohol-soaked PTSD (long before the illness became commonly acknowledged), they stagger and swagger into the barracks, swinging booze bottles, abusing the recruits with illogical, hostile desperation and singing the song that gave the play its title. As angry and aggressive as they seem, they convey so much pain, guilt and confusion, written at a searing epic level, it seems it could hurt to touch them. Surprising to see so much male vulnerability emerge from under machismo in a 70’s play. It’s part of the genius of playwright David Rabe, and both Kersh and Watson serve that muse with full commitment. Act Two gets wild and terrifying very fast. Be prepared for blood and that cathartic crescendo of destruction and emotional trauma described above. Streamers at L.I.P. Service Productions: it’s quite the Tony-worthy work of performance art. Cast includes Zach Leyva, R. Andrew Aguilar and Joshua Halen.

Through August 29, Thursdays through Saturdays at 8pm, at The Firehouse Theatre in Farmers Branch.

Lyrics to “Beautiful Streamer”, sung to the tune of “Beautiful Dreamer”:

Beautiful streamer open for me

Blue skies above and no canopy.

Reached for my ripcord – the darn thing was gone.

Beautiful streamer, why must it be

White silk above me is what I should see

To hell with the ripcord, twas not made for me.

The time is elapsing and here is the ground

If I’ll go to heaven or end down in hell.

Beautiful streamer, this is the end

All you jump happy son’s of a gun

One thought on “Fated into Existential Freefall: David Rabe’s STREAMERS at L.I.P.Service Productions”