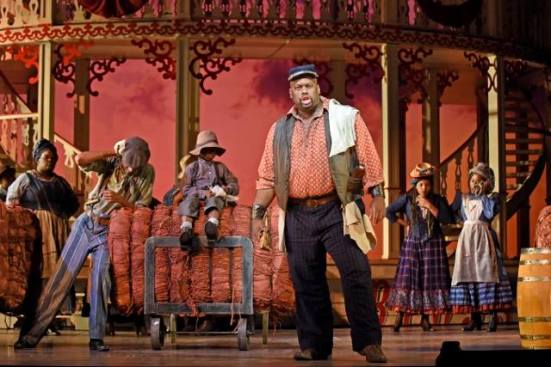 When Dallas Opera announced production of Jerome Kern and Oscar Hammerstein’s venerated, ground-breaking 1927 musical Showboat as part of its 2015-2016 season, it promised both parallel and contrast to their exhilarating premiere of Great Scott from last November (Jake Heggie and Terence McNally’s collaboration that deftly blends opera into American football settings and marries classical vocal demands to musical theatre styling). Unfortunately, where Great Scott soared in every element of execution, Showboat plods along in tepid fashion. It plays like a community theatre concert version adorned with set elements borrowed from another, livelier, production on a considerably larger stage.

Singing: the main problem.  Demands are high in terms of range, scope and breath support, even as the thematic content is simple and clear to express. But Showboat is still clearly musical theatre, NOT opera. For the most part, operatic over-singing mars the leads’ performances and renders choral numbers close to unintelligible. I found myself scrutinizing the universally labored style of delivery and wincing at the endlessly overblown vibratos and lack of clean, bright placement rather than enjoying the music or watching the story unfold. Alyson Cambridge (Julie) struggles blandly through the classic “Can’t Help Lovin’ Dat Man”, bringing little energy or freshness to the tune. She lacks any genuine connection to the depth of tragic sorrow expressed in the also famous love lament “Bill” in Act Two. It was not a question of a weak, unsupported voice, but one suited entirely to a different style of singing, with no music director’s influence evident to help her embody the character and the song appropriately. As Gaylord Ravenal, Michael Todd Simpson has charming moments of swagger and sincerity, when not singing, and he certainly has a marvelous voice; but, again, he overpowers his songs with operatic fervor and seems unaware of the emotional connections demanded by them. Morris Robinson as Joe sings “Old Man River” with dignity and majestic ease but never seems quite engaged as the character in this production, feels remote. As Queenie, Angela Renee Simpson brings a rough-cut edginess and warmth to her role, judging by final curtain response clearly an audience favorite; but sometimes she lacks the vocal power to be heard well. Jeffry Denman and Kate Laprest, as the show’s main comic relief duo, Frank and Ellie, fare better in matching voices to musical needs and embodying the energy and charm of their secondary characters throughout the show. Andriana Chuchman carries her lead role of Magnolia with vitality and sings with best “fit” of voice to song style in the production. Alone, she just can’t make up for the disappointing, odd fitting peculiarity of other performances. Mary-Pat Green and Lara Teeter as Parthy Ann and Cap’n Andy work stock banter handily as Magnolia’s ever-bickering, doting parents.

Set design, by Peter J. Davison, is colorful but puzzling, surreal drop elements clashing with realistic ones in an incoherent jumble. The multi-level riverboat build dominating center stage needed regular use by the entire cast to be effective rather than just sitting there half-lit, looming over everything. Most of the time, everyone, singers and dancers, alike, were crowded into elbow-jostling tight space down front or on the set’s apron, rendering the whole production a static and awkward quality. A lot less under-utilized “build” and more free space to act, react and dance would have livened up this staid performance quite a bit. Showboat is conducted by Emmanuel Villaume and directed by E. Loren Meeker. Members of the Dallas Black Dance Theatre II fill out the dancing ensemble.

Here’s my review of Great Scott in contrast, for a perspective on a Dallas Opera production that surpassed my expectations and assures a bright future for opera performance:

Showboat runs again April 29 and May 1 at the Winspear Opera House.