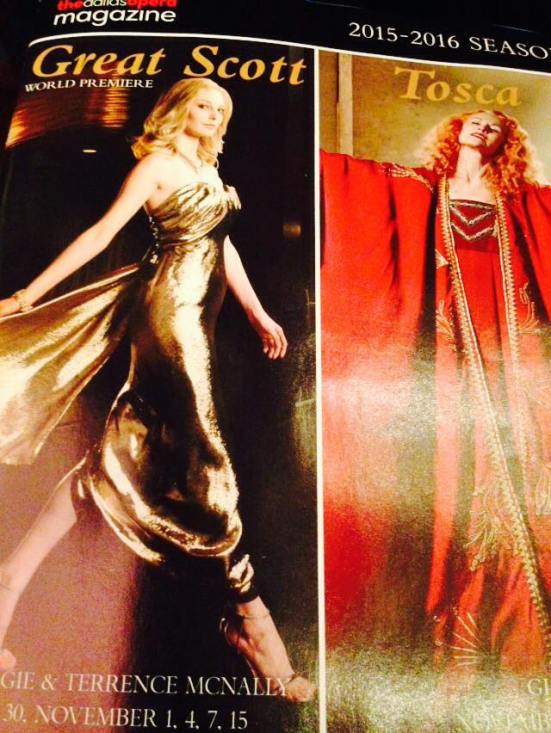 “This shit is hard!” quips lead mezzo-soprano Joyce DiDonato in a coy aside to the audience during new American opera Great Scott, now in its premiere engagement at The Dallas Opera through November 15. Seem out of place for opera? It’s a perfectly reasonable comment for the contemporary, hip tone of this dynamic, engaging new work by Jake Heggie and Terence McNally that blends opera settings with American football. The slang oozes irony coming from DiDonato, who makes everything she sings throughout the work seem pre-eminently easy-peesy, no matter the degree or scale of difficulty of execution. The show opens with a rehearsal of a “re-discovered” traditional work by fabricated composer Vittorio Bazzetti, “Rosa Dolorosa”, where DiDonato plays a slave girl who ultimately strives to save Pompeii by melodramatically descending via flying harness into the fiery maw of erupting volcano Vesuvius in a hyperbolic, and amazingly lyrical, final “operatic” gesture. DiDonato as diva star Arden Scott enters casually in Act One, strolling on stage through the rehearsing chorus with anxious stage manager hovering, in time to rehearse her first aria downstage center, kneeling beside the rehearsal piano. So simple, so unpretentious. Hard to imagine how anyone in attendance could avoid being blown back immediately and hard in his or her Winspear seat, given the soaring beauty of the music that emerges and DiDonato’s quintessential, exquisite mastery of her first jaw-dropping aria.

Heggie/McNally wrote the challenging, mercurial role of Arden Scott for DiDonato. She executes it – she kills it, in today’s vernacular — with vivacious charm, elegance and an easy modernity that illuminates her consummate skill and talent as a performer at the pinnacle of a distinguished career. Given the sumptuous praise heaped on DiDonato at a national and international level, it’s hard to find new words to describe her awe-inspiring performance. Indefatigable? Graced with a voice to melt hearts and the stamina and resilience to define and drive the show from her first note to the final faux opera aria’s triumphant, tragic conclusion, DiDonato is the real article at supernova scale. She’s a giant of an artist imbuing her art form with boundless love, dignity and profound, breathtaking talent. She is “the BOMB”. 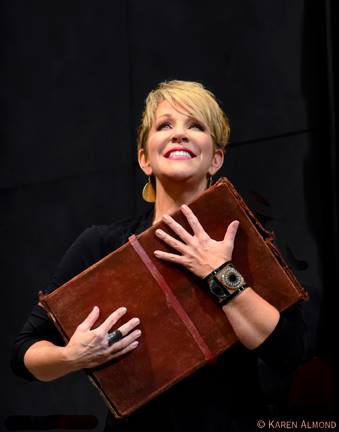 Heggie and McNally’s Great Scott rolls along at over three hours at an entertaining clip: part parody, homage, romance, comedy and drama. It cleverly interweaves doses of behind-the-scenes reality with a scene at a football stadium and selected performance excerpts of an old style opera (sometimes viewed from behind the action). It’s skillfully crafted to please both opera lovers (who will adore its allusions and musical references to beloved classics) and the opera novice cautiously exploring a perceived elitist, archaic cultural medium that welcomes them in, arms wide open. The work showcases the combined genius of Heggie and McNally, even as it is clearly, and forgivably, still in development. It needs and deserves fine-tuning to make it the robust creative achievement it promises to become. Near the end of Act One, a delightful number in a musical theatre/ comic opera style illustrates the on-going challenge of contemporary over-scheduled life with a quartet singing “I Couldn’t Possibly” (sic) front and center on their cell phones. The perfect 11o’clock number, its impact gets diluted as the work dribbles on a bit to a much less impactful act closing.

In the opera program, librettist McNally wonders, “Where is opera in the American DNA?” It’s right here, with Great Scott, spot on: affectionate, wry, warm, facetious and deep in turn, multi-faceted and glorious in its musical variety and style. You can see it once more at the matinee November 15. Prepare yourself for Joyce DiDonato as Arden Scott; she will simply knock your socks off.

One thought on “GREAT SCOTT! Dallas Opera breaks in baddest Heggie work yet”