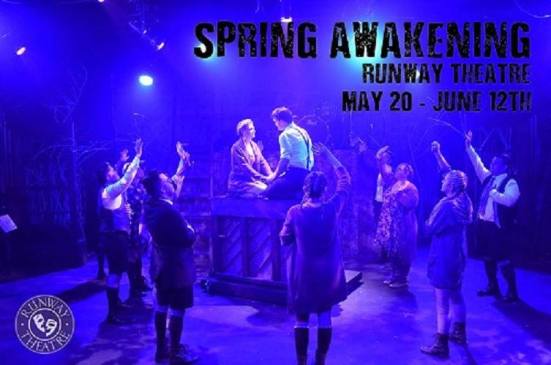 There are two sorts of theatregoers …those who have seen Steven Sater and Duncan Sheik’s Spring Awakening before (maybe multiple times), and those who have not seen it, ever. Both types could enjoy Runway Theatre’s current production of the 2006 Tony, Drama Desk and Olivier award-winning rock musical running through June 12. Fresh, sensual, vibrant, blessed with comely, youthful performers who sing tunefully, the show feels at home in this intimate Grapevine venue, even as it has worked quite well in major halls throughout the world. Runway’s production, directed by Derek Whitener, focuses on relationship rather than spectacle, conveying the hormonally-driven energetic overload of teen-agers struggling against the rigid societal demands of their late 19th century world with powerful dramatic impact and tenderness. The alternative-style rock music score, played by an onstage 5-piece band costumed to blend with the actors, reinforces the universality of the issues the show examines. Widener’s direction depicts the historical period in sprawling expressionistic fashion, with actors assembling as scenic elements, climbing ladders to “hang out” as observers, or moving set pieces to accommodate lightning fast scene changes with the natural flowing freeness one might expect from Hair or Godspell. A soaring vulnerability floats throughout, carried in the haunting tunes played by viola, violin, piano, guitar and drums, delineated clearly in the body language, voices and expressions of the youthful ensemble. Even though the tragic sacrifice of two key characters evokes angst, the production conveys a theme of hope to come for enlightenment and love.

Strong, even performances by the full ensemble keep the show bright, entertaining and illuminating. As thoughtful, rebellious “free-thinker” Melchior, Justin Alexander Duncan drives the arc of the show with charisma and dynamic choices. The show’s thoughtful protagonist, Duncan’s Melchior balances impetuosity with reason well, creating a moving, believable portrayal of an exceptional young man at odds with society, one who emerges bruised but strong enough to withstand its crushing blows. His vocal power and warm intonation works well with the rock opera tunes, and he blends smoothly in duet with female lead Wendla, portrayed with spirited, innocent charm by Erika Larsen. Their rendition of “The Word of Your Body” is more touching than the national tour’s (played the Winspear Opera House in 2010). As “bad girl” Ilse who escapes to an artist colony, Beth Lipton blooms luminous in ethereal pre-Raphaelite glow. Her resonant, wistful delivery of “Blue Wind” lends a reflective poignancy to the realities Ilse has experienced and her attempt to connect with doomed Moritz. The most sympathetic character in the show, Moritz can come across as stereotypically pathetic and petulant. Joey Donoian brings honest fragility to the role, allows the character’s desperation and depression to evolve naturally, never a caricature of the suicidal outsider. His “Don’t Do Sadness/ Blue Wind” sung with Lipton as Ilse conveys the deep pain of one resigned to a sad fate without ever devolving into predictable melodrama. Playing a variety of adult characters throughout the show, Lindsay Hayward and Dan Servetnick evoke both humor and horror with clarity and focus. Derek Whitener uses his leads and ensemble effectively to create a lively, engaging performance that serves the work’s complexity and dark themes well. This is a gut-wrenching show, not for the faint–hearted, but dignified and cathartic in final analysis, lyrical in effect.

Set design by Kevin Brown, choreography by Christina Kudlicki Hoth, music direction by Esther Lim, lighting by Scott Davis (terrific mood effects) and well-integrated sound by Danica Bergeron all blend securely to support the performance without ever overpowering the characters or muddying story line, And perfectly scaled to fit Runway’s intimate space. It’s a sure sell-out. Get your tickets early.

Friday and Saturday performances are at 8 p.m.

and Sunday matinees at 3 p.m.

TICKETS: $25 for adults and $22 for seniors and students