“Sticks and stones can break my bones, but words will never hurt me.”

Want to bet? Hard truths. Interpersonal dysfunction. Devastating betrayal. Neil LaBute explores relationship abuse overlaid with a heavy dose of misogyny from a variety of perspectives in three of his plays presented as a trilogy by the Dallas Theater Center. The first two plays, Fat Pig and The Shape of Things closed their runs on May 9. The final play, reasons to be pretty, runs through May 23 in the Studio Theatre at the AT&T Performing Arts Center (Wyly Theater) and concludes the series with a satisfyingly well-defined, artistic performance, downright disturbing in its impact. Solid acting, strong direction and smooth, slick production values conspire to make the final entry in The Beauty Plays its most successful endeavor.

As soon as the lights come up, playwright LaBute punts reasons to be pretty into full-scale confrontation mode by having his character Steph (played with give-no-quarter, heart-wrenching sincerity by DTC company member Christina Vela) launch into a relentless, invective-laced tirade of outrage and fuming recrimination against her character’s careless, passive-aggressive boyfriend Greg (Lee Trull). 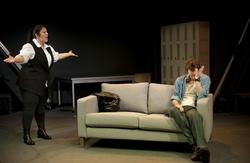 It’s one stereotype shattering, masterfully written attack, unexpected from a woman character in its level of sheer ferocity, alone. Women are almost never encouraged to unleash this much righteous indignation in “real life” ( not nice, not pretty) and frequently get cast in on stage roles written in mere reaction to male protagonists’ initiative. How delicious to watch Vela savor the script’s salty words with unrequited fire. Scanning the audience, I observed reactions ranging from shock and dismay (older patrons) to clenched jaws and narrowed eyes (middle-aged white males) to grins of delighted recognition (other women). Vela plays Steph with absolute conviction, a very human woman who knows when she’s been wronged and won’t take it, one who also recognizes her own fallibility. Director Joel Ferrell has capitalized on actor Vela’s range and skill in creating her role, perhaps more than any other director I’ve seen guide her. He fosters her Kali-Hecate-Medusa essence, yet allows her to underpin her character with genuine, palpable grief and a poignant need to be valued, not denigrated. In contrast, he shows no pity for Greg’s dilemma. He has actor Trull scurry away from Steph’s verbal assault like some slack-jawed, blank-staring rat, offering up feeble, pissy excuses and never meeting her accusations head-on. Another detailed character with subtle levels, Trull’s Greg doesn’t just say stupid, cruel things, he recognizes how stupid and cruel they are yet still repeats them, can’t bring himself to admit his mistake, or effectively apologize and set things right. Lazy? Uncaring? Director Ferrell helps Vela and Trull find a natural familiarity that bespeaks realistic “relationship” without ever letting the audience forget the symbolic communication challenges they represent as Man and Woman.

Ferrell has a different task in directing the other couple in the play, Carly (Abbey Siegworth) and Kent (Regan Adair). More recognizably conventional, individually and as a couple, Carly and Kent function in counterpoint to Steph and Greg, yet exhibit universal communication issues of their own. Ferrell balances their symbolic cultural aspects with their individualized humanity with ease. Theirs is a highly physical relationship, with crass public display of ass-grabbing, crotch-grinding and full tongue kissing as a crude, defiant part of it. Carly fits into the dutiful wife role, reacts to Kent’s overt attention like a trained seal and wonders (to others) if he might be seeing another woman, even after she becomes pregnant. Siegworth is a tall, elegant, strong-featured actor; yet under Ferrell’s direction she conveys an almost bland mousiness, perfectly believable as the working class wife of a sexist, extroverted chump. As Kent, Regan Adair plays against type, stomping around with earthy, blue-collar machismo, laced with a potent streak of arrogant meanness. Adair generally exhibits an open, engaging intelligence in the roles he creates; as Kent, under Ferrell’s direction, he portrays an unlikable, oversexed bully. Adair possesses impeccable timing and physical control on stage, which makes him fascinating to watch in both comic and dramatic roles. He uses these skills (overwhelming the weaker Greg or groping wife Carly) to bypass his normally elegant, intelligent bearing and convey the venial, low class brute Kent is. Kent has no deep motivations, but his challenge is. The creative task for a bright actor and director in creating this role arises in revealing the breadth of the societal dilemma he faces (marital fidelity) while allowing his superficiality and brutishness to dominate all his actions. The vitalization of a believable, fully fleshed out Kent is an artistic coup for both actor Adair and director Ferrell.

reasons to be pretty is by far the best of the three plays produced as The Beauty Plays: in script, direction, acting and production values. Neil LaBute ought to be very pleased with the outcome.

All performances of The Beauty Plays take place in the Studio Theatre located in the Dee and Charles Wyly Theatre at the AT&T Performing Arts Center, 2400 Flora St.. For tickets, call the box office at 214.880.0202 or visit http://www.dallastheatercenter.org.

One thought on “reasons to be pleased: The Beauty Plays 2010”