As fascinating as it is in concept, there’s something slightly, tangibly, askew in Circle Theatre’s current production of Bruce Graham’s Something Intangible. Maybe it’s the text or in elements of execution? Circle’s second major production of the year dealing with the creative milieu, its process and the relationships it affects (Michael Hollinger’s Opus ran through March 13, 2010, to general critical acclaim), this production lacks the textual substance, continuity and tight ensemble structure of the earlier one. Yet, it still has much to recommend it as viable performance art. 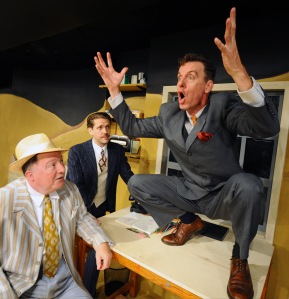 Based loosely on the Disney brothers’ story and rise to fame during the creation and production of their groundbreaking film Fantasia, Something Intangible frames its tale from the perspective of brother Dale Wiston (Regan Adair), the sensible businessman of the sibling duo. As he consults with a psychiatrist throughout the performance about his feelings of jealousy, guilt and frustration relating to his manic, creative brother Tony (Chamblee Ferguson), the audience is left to wonder if the scenes with Tony are recreations from Dale’s memory while “on the couch” or if they take place concurrently with the psychiatric sessions. Given that the psychiatrist never leaves the stage (Nancy Sherrard, who remains seated downstage right for almost the entire play), it’s probably a memory piece. A good thing, since Tony is so broadly played and presented as a pill-popping, selfish, irrational, irresponsible playboy and roughshod, prejudiced misanthrope it’s hard to imagine any “reality” where he could be taken seriously enough for major film studios to spend millions on his creative output.

Tony’s character, or the portrayal here, is the main problem with the production. In Act I he parades through in a series of ill-fitting costumes (a tennis outfit, polo or yachtsman garb, various tuxedos/ dinner ensembles) as he berates his dutiful brother Dale and the young graphic designer Leo (Daniel Fredrick) non-stop, mostly at intense volume. We never see the “creative genius” at work, nor any examples of his creativity. The sheets of paper carried through multiple scenes as sketches or drafts or finished work are blank. Blank. Intentional? Inadvertently overlooked? One of Dale’s ‘memory’ elements, representing the “blank slate”? In Act II, Tony continues emoting and not creating, works himself into such an emotional state when he doesn’t get his way that he ends up curled into a whimpering fetal ball downstage center. It’s a less than believable stage moment, falling flat as climax of an important emotional scene. It feels as though Graham’s award-winning play and this production work extremely hard to be at odds with each other.

You couldn’t ask for a stronger cast, for more talented performers. Regan Adair as Dale gives a polished, sensitive performance as the ever-caring brother, wracked with guilt for his own jealousy, yet furious with his brother’s excesses.

Adair could give a stage-worthy reading of the Denton phone book if he chose to. Chamblee Ferguson can give nuanced performance with depth and pathos (Stage West’s Copenhagen, Dallas Theater Center’s Death of A Salesman, to mention two recent examples of his superb work). In this production, he enlivens a stereotypical caricature of an ‘artiste’ and often so overpowers the other actors on stage he renders the production’s ensemble out of balance. Creative genius can be still and pensive, not just loud and hyperactive. Daniel Fredrick grounds the performance in day-to-day reality as the young gay artist on staff that Tony loves to torture. Nancy Sherrard makes a sensible, very human psychiatrist; her scenes with Regan Adair’s Dale shed the most light on the real challenges of life with a creative partner. Dennis Maher provides comic relief with easy confidence, naturalistic delivery, welcome respite from the overblown ‘sturm und drang.’ Matthew Gray directs, with set by Clare Floyd DeVries, lighting by John Leach and sound by David H. M. Lambert.

If you’re a fan of Walt Disney and find an imagined account of what his 1940’s life may have been like intriguing, Something Intangible will provide a fascinating evening of live theater, even with the curious incongruities in this production.