Never underestimate the masterful wizardry of Matthew Posey. He’s always brewing up something original, entertaining and full of real stage magic at his diminutive storefront theater The Ochre House on Exposition Ave. in Dallas. 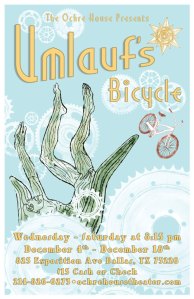 His Balanced Almond Theater Company presents the sort of imaginative performances that numerous larger, bigger budget theater companies strive for but hardly ever attain. Maybe their waxen artistic wings melt when they fly too close to that blazing sun of creativity?

Consider Balanced Almond’s Umlauf’s Bicycle, written by and featuring Posey. He concocts this brew from fresh, familiar stock–the classic Greek myth of Icarus, simmers it on the mysterious island of Crete, home to mad King Minos and the Minotaur and layers on the absurd in frothy dollops of Marx Brothers hijinks, spiced liberally with song and dance garnish. Flying bicycles with angel’s wings transport actors and audience high into the heavens and to unexpected soulful reflective regions underpinning the whole creation. Delicious, exotic, romantic, ephemeral, sensual, saucy: a treat for all the senses and not one whit pedantic.

Posey’s protagonist/ narrator Umlauf is a stand-in for Athenian master-craftsman/ architect Daedalus, a gruff good ol’ boy carpenter and fix-it man in bib overalls with a deep affection for a wooden duck decoy named Duck Butter he carries everywhere. Anyone who attempts to alert Umlauf to the wooden nature of his special pet gets rebuffed. Umlauf defines his persistent nature as well as his ability to see soul depths inside all life and its representations.

Umlauf and his innocent, exceedingly savant son Icarus (Justin Locklear) have been exiled to Crete, where Umlauf schemes to make the best of a bad situation by remodeling a palace and constructing a labyrinth for Crete’s King Minos (Kevin Grammer). Minos is as batty as they come, in a sort of harmless ‘uppa crust’ British way; importantly, he has a way peculiar, exceedingly savant daughter, Twinky (Elizabeth Evans), who spies Icarus. They fall instantly in love in an earthy Greco-Roman sense. Meanwhile, the Greek Chorus, a trio of goons who personify the Marx Brothers, comment upon the proceedings, sing and dance and add enough absurd hilarity to balance out the myth’s inevitable tragic ending (Mitchell Parrack, Ross Mackey, Trent Stephenson). There’s a unique cameo portrayal of the Greek god Poseidon (sure to set a classicist’s teeth on edge), and Kevin Grammer doubles as the half-bull/ half man Minotaur.

Umlauf invents flying bicycles with wings so he and Icarus can escape from Crete. In The Ochre House’s 10’ by 12’ performing space, actors mount bicycles suspended on wires and peddle them into flight.

Here’s Posey’s genius as a writer/ director. The audience gets transported into imaginary ether and can’t help believing that the characters are indeed flying way up into the clouds. Act II’s love song duet between Icarus and Twinky introduces a bittersweet, romantic element. And when Icarus mounts his bicycle at the end and begins to soar up and up and up, the heart of every audience member soars with him, with hope, with love, with poignant regret.

Go for the free wine and beer! Go to see a marvelous show that not much in this region can touch for pure theatricality. Original music by Ross Mackey; a superb Jungian labyrinth mural painting by Trent Stephenson adorns one wall.

Here’s the wikipedia low-down on the Myth of Daedalus and Icarus:

In Greek mythology, Icarus (the Latin spelling, conventionally adopted in English; Greek: ­Õkaros, Etruscan: Vikarel) is the son of the master craftsman Daedalus. The main story told about Icarus is his attempt to escape from Crete by means of wings that his father constructed from feathers and wax.

He ignored instructions not to fly too close to the sun, and the melting wax caused him to fall to his death. Icarus fell into the sea in the area which bears his name, the Icarian Sea near Icaria, an island southwest of Samos. The myth shares thematic similarities with that of PhaÎton, and is often depicted in art. 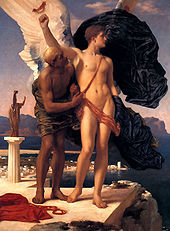 No stauesque nudes in this show

In November 2010, The Dallas Observer honored Matthew Posey for his artistic endeavors and dedicated mentorship by designating him a “Mastermind” at a regional awards ceremony:

One thought on “Take Flight @ The Ochre House”