Question: We live in an aggressively visual age; images dominate the popular culture. But which art form has the most to say about contemporary culture, and why?

Mirror, mirror, on the wall: which is the most culturally reflective art form of all?  The passive implication of that concept chafes me. Art as mimesis. Of Greek origin in Latin form, in art, meaning representation or imitation. Certainly there’s innate validity and value in mimesis. But why limit the options? Open the mind to the inherent potential. I believe that art in its galaxy of manifestations does a great deal more than reflect or comment upon contemporary culture. Further, as a genre that manifestly employs multiple aspects of the other art forms, live theatre not only speaks cogently of today’s cultural reality, but also inspires personal action and demands societal engagement that can affect positive change.

We humans are social creatures. Live theatre is a ritual we come hard-wired to seek in community. Media pundits and corporate marketing promoters wave the exploding proliferation of shiny “personal devices” in your face, all pontificating non-stop how we can get everything we need and desire from insular, isolated experience. I’m not sold. If that were so, nobody would continue to build mega churches that attract ever-growing congregations. If that were so, the behemoth sports stadiums that US cities erect with bureaucratic pride at great expense would barely fill during games. Pricey tickets? You couldn’t give away the seats or fill the gold-trimmed collection plates if isolation were truly the new Shangri-La. Church services, sports events: essentially, they are prime examples of performance ritual, much like the “well-made” play. And that’s what live theatre does – it performs a revelatory ritual of human interaction, artistically (most of the time), that has enormous power to comment on culture and change perceptions, expand tolerance and open hearts to life’s truths. I’m not flying solo in this belief.

I sussed out responses to this week’s contest question from artists, leaders and advocates in our active close-knit N. Texas arts community. They responded with great passion and enthusiasm. A sample of opinions:

TRE GARRETT: “As the Artistic Director of a small theatre that is now dedicated to producing works that engage, inspire and entertain my local audience, I am constantly reminded of the powerful relationship between theatre and contemporary culture.

Theatre is able to reflect and challenge an audience immediately. As an artistic director I am able to choose works that speak directly to what is happening in our culture today. Taking popular thought, common struggles and social challenges and putting them into characters’ mouths that look like my community’s audience creates conversation and self- reflection. In the theatre people can see, right there in front of them, social issues and cultural struggles come to life. In a world that is becoming ever more digital, live theatre creates an opportunity for a diverse community to gather together to celebrate and examine our humanity. Theatre has the most to say about contemporary culture because we are speaking with the contemporary culture’s voices.  Through these voices and the strength of performance we can also offer healing by the example of a play’s resolution. In the theatre, life is right there in front of you and the energy of life is shaped into expression that incorporates all other arts.”  Tre Garrett, Artistic Director, Jubilee Theatre  Fort Worth, TX Director, Marcus Gardley’s “Every Tongue Confess”,  at Pittsburgh’s August Wilson Center for African American Culture

JUSTIN LOCKLEAR: “The art forms that have the most to say about our culture are the youngest. The older forms, paint, sculpture, theater, and music for orchestra, are all developed through academia and tradition. They are the vital signs of emerging thought and inspired work, however, their influence has been greatly softened by the noise of Internet culture. The newest forms of popular music, film, and fashion are the most vocal in my ecosystem, and they are all based in images. Notwithstanding the art we appreciate in an intimate, aesthetic or nostalgic manner, the truth is that the world worships extravagance. Thus, that’s what our ego manifest has become. Yup. And then culture sells humanity back to itself. And land fills…” Justin Locklear, performance artist and “Pioneer of the Suavante Garde” at The Ochre House, in 2011 DFW Theatre Critics Forum’s Most Promising Young Artist. http://www.ochrehousetheater.com/

MARK LOWRY: “While I believe all disciplines and forms of art are relevant to our culture, theater, for me, is the most immediate, perhaps because it often involves so many facets of the other arts, visual and performing. As a lover of all types and scales of theater, from Broadway-sized musicals to one-man shows performed in the smallest of imaginable spaces, it strikes me that theater-makers can immediately respond to world events and social issues, and that word can spread faster now through social networking. Street theater performance in the Occupy Movement is one example. Theater related to the Treyvon Martin murder can’t be far off. Even when it’s not specifically about that killing, it’s striking how any theater piece dealing with race or senseless killing stirs up fresh, but deeply rooted, emotions.”

GREG PATTERSON: “One of the most fulfilling aspects of my work in non-profit theatre as a development professional is the satisfaction that often my work has been responsible for making more people culturally aware in our community.  For instance, a new auxiliary support group we founded three years ago called Women of WaterTower Theatre (WOW!) has brought more than 160 professional women into WaterTower Theatre’s doors, many for the first time and, they have all become staunch advocates for the arts in return.

Greg Patterson, Out of the Loop Fringe winner Diana Sheehan

That’s true job satisfaction especially if you have a passion for the theatre – and the arts – as I do.   I see my job as a kind of “connector” if you will…someone who tries to facilitate opening doors to the theatre to people who might not otherwise venture through.  I can’t tell you the times I’ve heard donors say to me, “oh, I don’t think I’d like going to the theatre, or I don’t like opera, or … “ and then many times once they’ve experienced it for the first they’ve become huge advocates for the cause.  To do this job well, it’s not just about asking for money, it’s really about connecting people to your “passion.”  If you do that right, the donations come on their own.  Indeed, WOW! members have contributed – all on their own without me asking – thousands of dollars beyond their membership dues because WOW! ignited a passion they didn’t even know existed.  Someone said to me recently that I must be good at ‘asking for money’ and I replied, no I seldom actually make a direct “ask” for money.  I just connect people to the theatre and the live theatre experience makes the “ask” for me!” 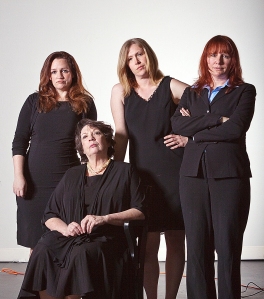 Live theatre, relevant nexus where all art forms flourish in cultural context, best holds up a mirror to our origins, our present predilections and paradigms and our potential. That’s a concept worth reflecting on and worth acting upon.