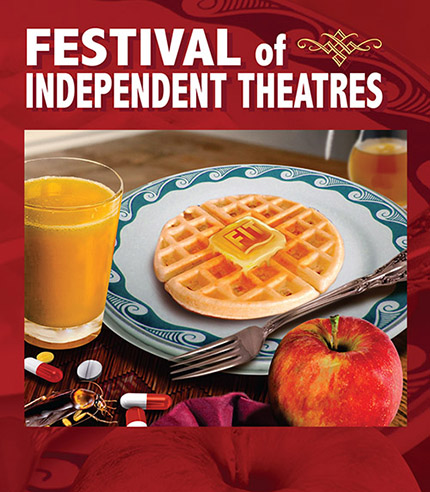 How does a year pass so quickly? Time flies when you’re having oodles of fun, right? It’s Festival of Independent Theatres time at the Bath House Cultural Center. Will the power stay on this year?

Here we have a rework of an earlier quirky movement/story fantasy piece from the extremely creative mind of Jeff Colangelo, as directed by an Isaac Young (no bio in program). I saw the earlier incarnation and found the concept beguiling and the physical theatre aspects innovative and expressive. This reworked version seems more scripted and a little tedious, as if it got stretched out to accommodate FIT’s specific time frame rather than to make a larger artistic statement. Still, it’s quite unique; the idea of pillow fighting “staged combat” is pure creative whimsy. I hope Mr. Colangelo takes himself off to some physical theatre conservatory where he can explore, develop and refine his obvious talents and skills with the best in the business, like the Dell ‘Arte International School of Physical Theatre based in Blue Lake, CA, for example. http://www.dellarte.org/dellarte.aspx?id=4

Doing the same stuff over and over again in Dallas TX has got to get old….

Haven’t seen it? Don’t miss watching a truly talented lad with a recent SMU arts degree do his highly creative “thang” at FIT.

From Nouveau 47, as concocted by Jim Kuenzer and directed by Donny Covington.  I remember seeing Lulu Ward start an animated monologue as if she was part of a television sitcom from the 80’s or 90’s, but then a battalion of cockroaches crawled up from under the old carpet at the Bath House Cultural Center and massaged me into demi-narcolepsy. I dreamed of Ben Bryant with a weird accent and gargantuan moustache, playing a guy who used to be a cockroach, too, right out of Franz Kafka. Diana Gonzalez floated on in different wigs playing several sit-com-style characters. John Flores was tres amusante as a snooty Apple Bar genius. Sitcoms aren’t my bag, sorry to say. I was very grateful for the cockroach massage. I can guarantee that this play is not set in 19th century France….

Echo Theatre, that loyal supporter of all things Bath House Cultural Center, presents this new play written and directed by their newly-minted Producing Associate Shelby-Allison Hibbs. Is this an autobiographical piece by the dynamic Ms. Hibbs? It focuses on a psychotic break experienced by a bipolar writer with a functioning typewriter. I found said typewriter distracting, anachronistic. Costumes and dialogue appear to be contemporary; who under the age of 45 uses a typewriter? Two strong local actors play the split personality woman, Cara L. Reid and Whitney Holotik, against a background of fast-moving, gratuitous projections on the back wall. This one act zips by, offering intriguing tease snippets of characterization. Both actors take ample advantage of this attribute, and Ms. Hibbs does seem to have the real start of a keen director’s vision . Overall it feels shallow as a work of art, like the early stage of a play that warrants further development and exploration. A good “fit” for FIT. Glad to see the new blood energizing Echo.

A Trace Crawford wrote this work, balanced on the edge of Godot’s left eyelash. ChurchMouse Productions produces it, run by the fabulous folks who present the yearly Black and White Whodunit at the Eisemann Theatre, Kurt Kleinmann and Barbara Weinberger. Chad Kline and Jared Culpepper play two very different sorts of men assigned to “watch” for something, or somebody, out the window of what appears to be a hotel room with a single bed and a few chairs. There’s a cat and mouse quality to the script. Both actors bring focus and vitality to the performance; they are both fun to observe. Directed by Jordan Willis in his debut in that capacity, the actors reach a pitched level of communication far too early in the work, giving them little place to go. Speed of delivery, overlapped dialogue and frenetic movement just ‘cuz overwhelm where there could be effective silence and stillness generating real suspense. Another good ‘fit’ for Mr. Willis’ first time out of that special bucking chute. And always a pleasure to see the script gem intelligent ChurchMouse unveils. Double entendre alert! Definitely worth attending. 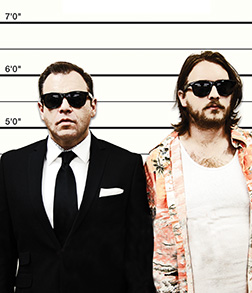 Four more shows to go. The Festival of Independent Theatres continues at the Bath House Cultural Center through August 2, 2014. Stay tuned for next week.