Glide from chaos to redemption with the Ochre House’s Christhelmet, a vaudevillian drama with a transformative twist, written and directed by Ochre House founder Matthew Posey and featuring him in the title role.  A fixture of local theater for more than 20 years, Posey has carved out a respectable career for himself on screen as well (Lonesome Dove, No Country For Old Men, Dallas).

In Christhelmet, morose barkeep (Dante Martinez) presides over a seedy dive, Cheers for the cheerless. Six bar patrons, all malcontents, dreamers and nihilistic ne’er-do-wells, share a hatred of local gangland-style “enforcer” Athalgarde Christhelmet (Posey at his surly, menacing best). Never mind that he has beaten up, impregnated or collected “protection” from each of them, he still imbibes with them.

Bryce Jensen, in a tender, fearless performance as hunch-backed, aging queen Karl, musters all the poignant dignity he can to defend a deceased lover. “Francois was not a white trash hors d’oeuvre.” Even as the line inspires laughter, it provides a moment of grace to recall later. Seething with Manson-like rage, Mitchell Parrack provides a chilling, earth-bound opponent for Athalgarde in Horsy John, death angel. “Sometimes it’s the monster that brings salvation,” Athalgarde mutters. 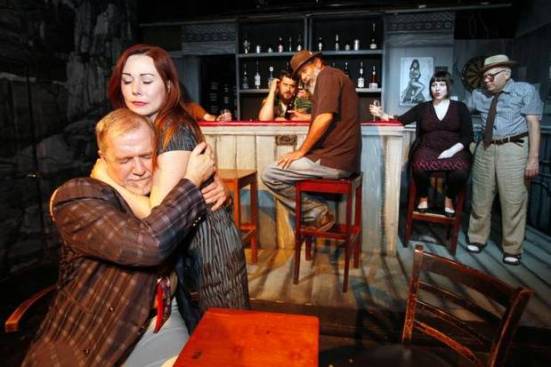 The women in Christhelmet give as good as they get, with strong actors playing dramatic reality beneath farce. Cassie Bann, as a daughter with an alcoholic father (unapologetically addicted Kevin Grammer in hospital gown and baggy briefs), never becomes clichéd. She rounds out her character’s angst with genuine human concern.

As Athalgarde’s pregnant lover, Marti Etheridge Schweitzer matches Posey’s resonant charisma with ease in their contentious encounters. Portraying the play’s change catalyst, a filthy, homeless woman, Carla Parker integrates her character’s homeless persona with her surreal reputation as a sorceress. At finale, she invokes an eerie spell over the audience. 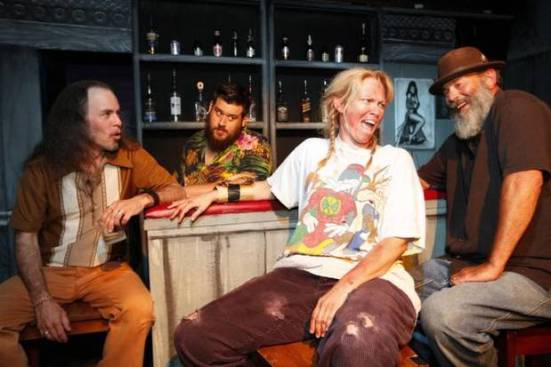 Ultimately, Christhelmet  belongs to Posey. His Athalgarde undergoes an unanticipated, but believable, transformation in Act Two. The Ochre House exists as a tiny box theater wedged into a strip of noisy bars in Deep Ellum, not the easiest place to suspend disbelief during performance. Watching Posey take Athalgarde through his arc of redemption sweeps up the audience on a breathtaking ride far removed from the venue’s limitations.

One thought on “Grace in Styrofoam: CHRISTHELMET at The Ochre House”