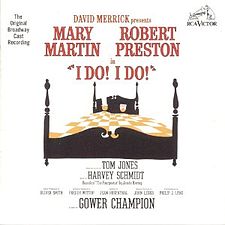 Regional new theatre company venture, Brick Road Theatre, began its voyage across the boards by presenting the 1966 Tom Jones and Harvey Schmidt 2 person star vehicle musical curiosity piece I Do! I Do! at Plano’s proscenium-style Courtyard Theater on August 28-30. Directed and choreographed by Gower Champion on Broadway, the show featured marquee idols Robert Preston and Mary Martin. It ran for 560 performances and received Tony nominations in seven categories, with Preston winning Best Actor in a Musical. In his Dec. 6, 1966 review, NY Times critic Walter Kerr wrote that the material was “on the whole barely passable, a sort of carefully condensed time capsule of all the clichés that have ever been spawned by people married and/or single…the lyrics are for the most part remarkably plain-spoken.” I  agree with Walter Kerr’s overall assessment. It’s rife with hackneyed clichés. In addition I found much of the dialogue cringe-worthy with blatant sexism, reflecting the era in which it was conceived. The scene where the philandering husband slaps his defiant wife hard into submissive silence on the bed? This former victim of domestic violence found it tough to remain in her seat, might have departed if I didn’t respect the sincere aim of the folks producing the show and the caliber of artist performing in it. I did, I did… hold my breath but made myself stay. 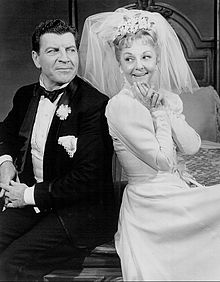 Robert Preston and Mary Martin in I DO! I DO! in 1966 on Broadway

Why mount a show like this, laced with archaic faux pas, plot gimmicks and clichés, one that features a pleasant but unremarkable score? Perhaps it appealed to the Brick Road Theatre folks for the same reason the Broadway producers liked it to start with: cheap to produce, with its limited set requirements (a large bed dead center stage, with a few incidental furnishings left and right). Everybody has to start somewhere. Maybe I Do! I Do! marks a financially conservative start for Brick Road Theatre.

Recording artist Ed Ames had a hit with the show’s song “My Cup Runneth Over”. Nothing else leaps out as memorable music. The best performances in the Brick Road production, by landslide dimension, came from two of the region’s finest acting singers: Janelle Lutz, performing “Flaming Agnes” (just before she got walloped by the hubs). Linda Leonard, (who also directed, simply and economically), singing “What Is A Woman” made a slowish Act Two worth sitting through. The show follows the bedroom life of one married couple, tame except for the slap, from 1895 to 1945. Different performers appear in the roles as the characters age and the relationship changes. Oklahoma City University graduate Jason Bias played the philandering husband Michael 2 with presence and style, an excellent foil for Janelle Lutz’s wronged, vengeful wife, Agnes 2. Other performers included: Connie Marie Bentham, Philip Bentham, Dan Servetnick, Ivy Opdyke and Forbes Woods. I hope they will all stay involved with Brick Road Theatre as it moves into more challenging, contemporary material.

Did I love this show? Not hardly. Do I hope Brick Road Theatre will flourish and grow? I do, I do.

The program claimed this production as the regional premiere. In 1974 Carol Burnett and Rock Hudson performed it in Dallas on its national tour.