You might call them the Three Musketeers of Oklahoma City Repertory Theatre (CityRep). You won’t ordinarily find them striding about in hip-high boots, buckling swashes while wearing brocaded hats adorned with extravagant feathers, unless they get cast in roles that call for that costume. On any normal day, you’ll find Founding Artistic Director Donald Jordan, Co-Founding Resident Artist Jonathan Beck Reed and Artistic Associate Michael Jones attired in business suits or work duds, employing a wide array of creative, communication and business skills in order to make CityRep the leading Oklahoma City performance arts company success it has become. They have one major thing in common. They all graduated from Oklahoma City University.

“Don and I share 38 productions and two weddings.” Jonathan Beck Reed met year older classmate Donald Jordan at OCU, when he transferred in as a performing arts major in 1979. The day before school started he headed off to an audition for OCU’s “The House at Pooh Corner”, a grade school touring show. “I met this big guy Don Jordan crossing the street. He led me to the auditions, and it was like we had been life-long friends. We have never lost that close friendship.” Don Played God and Jonathan played the Devil in OCU’s JB before Don went on to graduate school in Dallas. Their careers as full-time professional actors and singers launched, but they still managed to maintain contact, in an era prior to the ease of cell phone and internet communication. Ten years passed. The two men racked up impressive resumes for performance in prominent professional shows and tours, never together. Then divine intervention stepped in.

Jonathan Reed recalls fondly, “After I appeared in the national revival of The Music Man as Harold Hill I moved on to 42nd Street. As things do happen, a fine actor cast in another comic role in the show backed out at the last minute, leaving the show on pause and its director furious for the costly, brief notice. I arrived in his office for a meeting just as he received the news. He snapped at me, ”Do you know anybody who can play this role well, not just a buddy, but someone who can REALLY play it?” I knew exactly who to recommend: that same big guy who led me across OCU campus to my first audition a decade earlier, Don Jordan. During 1988-1989 we performed together in the Broadway tour of 42nd Street, across the US and Canada and even toured to Israel.” 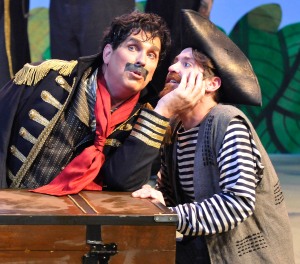 Out on the road they shared many dressing rooms and late night diners, talking non-stop. They dreamed aloud about starting their own theatre company that would represent the arts well, where they could apply the craft and professionalism experienced in the big-time Broadway and touring league. They dreamed of opening this company on their alma mater’s turf, in Oklahoma City. Time passed with more pro gigs for both men, but their dreams finally became reality in 2002.

“Pick your friends wisely in college because they will haunt you the rest of your life, “ quips Donald Jordan. They launched CityRep in 2002-2003 with a tight, appealing season of three Oklahoma premieres: The Leading Ladies, I Love You, You’re Perfect, Now Change and the original social commentary work I Am A Teacher. Since that time, it’s been a carefully orchestrated and sensibly developed process of merging artistic value with audience appeal, always with a fastidiously tended budget. Very few loose ends mar a CityRep production. Growing every year, in spite of economic challenges and downturns, CityRep always produces engaging, quality entertainment to spark the imagination and please the visual palate. The company mounts shows in two major theatre space in the City: a proscenium theatre that seats c. 300, and a basement black box space converted out of a storage space by Jordan that seats about 90 patrons for intimate performances. “We are proud to co-produce major works yearly at OCU in the Burg Theatre in conjunction with the theatre and music departments. Part of our mission is to give today’s OCU students the chance to work with successful professional artists from across the country before they graduate and move into the professional world.”   OCU graduates include recent Tony award-winner Kelli O’Hara and Tony winner Kristin Chenoweth, who is about to be honored with a star on the Hollywood Walk of Fame.

CityRep has racked up unique national honors for Oklahoma since 2002 as their seasons have expanded and attendance has increased due to continuing high caliber work. Recognition includes winning the Oklahoma Governor’s Arts Award, a national award from the American Theatre Wing (organization that produces the Tony Awards) and a special Proclamation from the national Actors’ Equity Union for excellence in professional production. In 2014 PBS/ Oklahoma Educational Television Authority (OETA) produced the documentary “Back in Time”, commemorating the 75th anniversary of Steinbeck’s novel The Grapes of Wrath, which featured the CityRep/OCU co-production of the stage adaptation. In 2015 the OETA documentary won an Emmy Award in the “Arts/ Entertainment – Program/Series/Special” category. 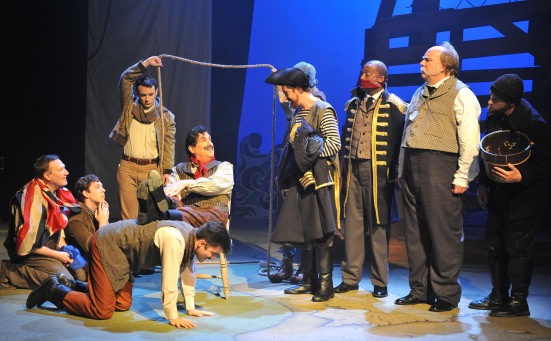 Peter and the Starcatcher, directed by Michael Jones

“I wanted to move to New York City and be in the chorus of a Broadway show,” remarks Michael Jones. Michael attended OCU from 1977-81, entering on a music scholarship. He knew Jonathan from Lyric Theatre in Oklahoma City, where he ushered in high school. When he got cast in JB at OCU, he met Don and Jonathan, cast as God and The Devil. The Three Musketeers friendship was born. After Jones earned a Master’s in Musical Theatre at OCU, he toured in Pacific Overtures, starring Mako, on the West Coast for nine months as the only white boy in the cast He stayed on the West Coast, working in nonprofit development. On one trip home from Seattle, he saw that CityRep was coming together. Don immediately asked him to direct I Am A Teacher for the first season. And the trio was off and running.

What makes the three-way partnership flourish and endure life’s challenges? Jonathan Reed answers without hesitation, “ Maintaining open and honest relationships are key. We don’t always agree on everything, but we have high standards and constant communication. As a small Equity theatre we manage to pull together winning shows on tight budgets because we work together well, always a team, always focusing on the art.

Don Jordan reflects on the impact of the years the three partners spent at OCU: “I know I speak for Jonathan and Michael as well when I say how critically important the outstanding professional training, encouragement and mentoring we received at OCU was in providing the foundation for success we have all enjoyed in our careers, together and separately. A strong, focused grounding in professional standards, ethics and procedures, as well as a diversity of experiences in performing, directing, design and management helped prepare each of us for successful careers. We owe so much of that to OCU and its committed professors and mentors. Part of why we mount a show with OCU every season.” 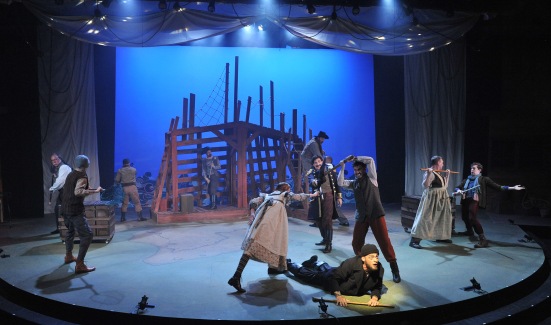