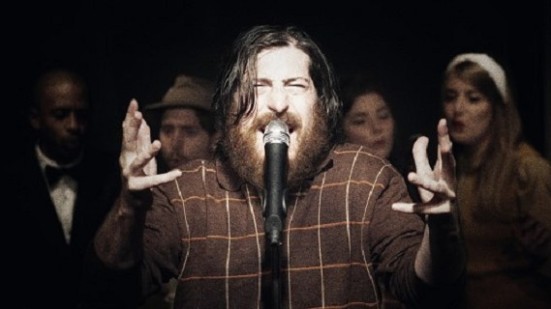 Most human life consists of an ongoing, benumbing experience of mundane, routine existence. What “drama” appears isn’t all that pretty. We seek out events and connections that transport us beyond that limited experience, that can add hope, context and meaning. We long for joyful release in living our often-frustrating lives. Truly creative theatre can transport us to emotional heights and depths that function as energizing counter-balance to everyday drudgery, whether it be comedy, drama or tragedy. An audience can find ample opportunity for transcendence in attending the unique, intense productions at Matthew Posey’s Ochre House Theater.

Now in its final weekend of a well-attended run, Original Man, written and directed by Posey, is an exceptional work among many fine ones, capable of carrying an audience far into the hearts and souls of the characters depicted while providing damn fine musical entertainment. Original Man runs through November 18th. One of the best productions in the region in 2017, in this critic’s estimation, if you snooze, you lose. Don’t miss it.

I’m always amazed at how much credible world can spring to life on the Ochre House postage stamp-sized stage, with small budget, gap-toothed set pieces and essential light plots without complicated effects. The minimal tech team, under Posey’s Artistic Direction, pulls it off in many ways much better than larger, better-funded, more technically resourced production houses do, routinely. A visceral reality floats up and grabs you hard, by the balls, by the throat, by the imagination…and never lets go until the stage lights go down and Posey’s pooch Walter ambles out from backstage to greet the crowd lingering, basking in the show’s genial afterglow. 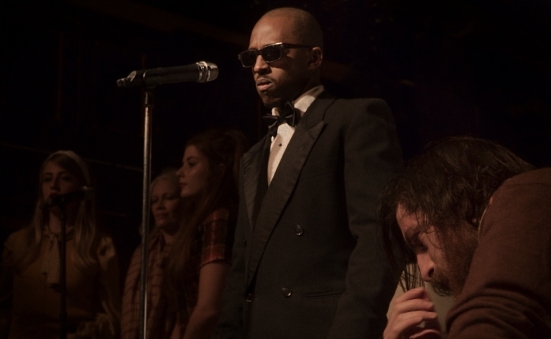 Original Man presents a gritty reality in a slovenly, lower class Yorkshire kitchen/sitting room, dominated by grieving, dotty, drunken, grouch Old Joe, played by Posey with curmudgeonly bombast and thick-accented, working-man epithets. He mostly hurls them with venom at his youngest son Joe, a sloppy, slacker druggie with stringy, black hair obscuring his face (Marcus Stimac). A parade of siblings, friends and leeches, bitchy broads and Ray Charles doppelganger RayRay meander through, sometimes reinforcing the play’s scummy reality. Most intriguingly, they all enliven the secret, rich fantasy world inhabited by Joe, who dreams in vivid tones of a rewarding life as a Joe Cocker-style club singer. Mic stands scatter about the edges of the simple set, unobtrusive but handy when one of the twelve tunes emerges from Joe’s imagination, as performed by him solo or with the balance of the cast. Stimac gives a sterling, heart-wrenching performance as Joe, managing to convey the darkness of a Johnny Cash, the sordid rawness of a Kurt Cobain, while all the while styling unerringly after Joe Cocker, yet never losing context as Joe the aimless family loser, brunt of his father’s savage attacks. Stimac uses silence as effectively as effusiveness. As the soul-thread drawing the audience through the show’s arc, his steady, subterranean hopefulness brims over at finale, rendering Original Man one of the most genuine, cathartic stage experiences of the year.

Remainder of the cast creates a smooth ensemble around the two Joes with clearly defined arcs in splendidly supportive fashion, an Ochre House trademark. Everyone has a grand “solo” moment, rounding out the facets of Joe’s competing visions of imaginary v. squalid existence. Justin Locklear doubles as Music Director (dynamite!) and Joe’s semi-responsible, unfortunate older brother Lenny, a role allowing him to effectively engage the audience’s empathy and reveal perspective on the Joes’ worlds. Christian Taylor adds suspense and conflict with calculated, predatory evil as the money guy wanking everyone’s life into pure hell. Quinn Coffman and Monet Lerner portray the two tough-mouthed babes and perform entrancing solos, so illustrative of the lot of women in the sexist, rough world created. Darren McElroy, Carla Parker and Chris Sykes flesh out the ensemble, adding depth and humanity from which catharsis can arise. Original Man looks set in a late 60’s-early 70’s vibe, but it’s a play with music to stroke the hearts and souls of audiences from any era.

Original Man concludes its run Saturday night November 18th. It could sell out.