When William Moulton Marston created the fictional Amazonian character Wonder Woman for DC Comics (first appeared in 1941), he probably had no clue of the paradigm shifting, multi-generational impact and popularity she would have. Nor could he have imagined the impact one creative, intelligent, impassioned producer/advocate, a veritable Wonder Woman in her own right, could have on the North Texas regional performing arts scene with a diversified national component. Consider Bren Rapp, seven year producing powerhouse behind the successful, critically acclaimed Fun House Theatre and Film. She’s Dallas’ very own Wonder Woman.

A graduate of SMU with a dual degree in political science and theatre studies, Rapp thought she was headed for law practice. But given her father’s devotion to sports and her mother’s career as a concert pianist (entered NYU at age 16 after playing Carnegie Hall), reading law books wasn’t in her cards. She dove into the tough, male-dominated field of professional sports under the mentorship of JB Bernstein (writer and subject of Disney’s The Million Dollar Arm) and got an education and career in marketing, management and visionary engagement no Arts Administration MA or JD could have given her. When her son Doak signed up for an acting class with N. Texas regional top actor/playwright Jeff Swearingen, Rapp saw the potential to grow a program built around his talents and skills. Dallas’ one of a kind youth theatre program, Fun House Theatre and Film, emerged and flourished under her guidance, with remarkable productions of Swearingen’s originals and classic adaptations performed by his critically acclaimed troupe of dedicated, young professional actors.

Professionals performing in primarily youth-cast shows directed by other leading regional artists became a unique trademark facet of Fun House Theatre and Film. In 2012, Equity actor/director Andy Baldwin became the first regional professional to join Fun House, featured in the cast of Swearingen’s Laughter In The Stars, his original adaptation of Antoine St. Exupery’s The Little Prince (starring father/son acting team Shane and Jaxon Beeson). He went on to direct several Fun House shows and became a Producing Partner with Rapp and Swearingen. That laid the groundwork for Rapp’s ongoing professional relationship with Baldwin, who now lives and creates in New York City. He currently directs the Fun House Theatre and Film adult actor showcase production of the Swearingen original Stiff, running February 21 through March 3 at the TBG Theatre in Manhattan.The show is targeted for an open ended Off Broadway run in the fall of 2018. Lead producer of this project is multiple Tony Award nominee Terry D. Loftis, along with Rapp, Baldwin and Gregory Patterson. Baldwin applauds Rapp’s leadership and creative capacities equally. “ Bren Rapp saw the potential in Fun House becoming relevant outside of Dallas and made me the company’s “boots on the ground” in New York City. I believe this is Bren’s strongest suit, the ability to see change potential. She is fearless, facing it by embracing it. Bren has changed me as an artist. She has taught me more about branding, imaging, and tactics far beyond the artistic production table. This is invaluable to any motivated business person seeking to have a full, robust career in the arts.”

In 2017, after attending Upstart Productions’ Waiting For Lefty by Clifford Odets, produced by Equity actor/director/artistic director Joey Folsom, Rapp met with Folsom to see if there could be any potential overlap in pursuing creative projects. Their partnership commenced with Lenny Bruce. She focused her business acumen on Folsom’s longtime dream to perform the solo show Lenny Bruce Is Back by Sam Bobrick and Julie Stein. 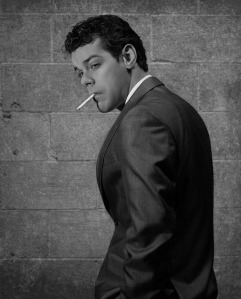 With Rapp as producer/publicist, Folsom performed the show in non-traditional venues (burlesque houses, comedy clubs), touring to fresh, fascinated audiences in Dallas, Fort Worth, Chicago, Los Angeles and New York City. As the two creatives developed this project they became business partners. A plethora of innovative performance art ideas bubbled up, leading them to meet with successful arts fund developers at both regional and national levels. What does Bren Rapp bring to the partnership? Joey Folsom responds without hesitation. “Bren has a tremendous work ethic and skill set. She doesn’t get intimidated by big ideas. That makes all the difference when it comes to developing and presenting the work we have before us.”

Most people in the N. Texas performance art community know Joey Folsom as a formidable stage actor, but they may not be aware of his experience as a successful film actor, producer and screenwriter. While still touring the Lenny Bruce solo play and developing/seeking funding for the Stiff NYC project, Rapp and Folsom decided to start a film company, Dicemen House Cinema, to produce quality films with a unique financial model. Rapp describes their partnership plan. “Unlike many independent filmmakers’ models, our business plan focuses on sourcing distribution interest prior to production beginning. In other words, distribution chanels get developed first, opening the door wide to finding production funding. Our current projects budget in at well over a million dollars with distribution of the films already on lock through an unprecendented parternership with an independent film industry leader providing a winning opportunity for investors most indie projects can’t boast pre-production. These films will get seen and at a profit to investors. Folsom has co-written the three slated film projects with award-winning filmmaker Derek Presley. Projects include a headlining neo-noir thriller, JACKRABBIT, a topical drama and a fantasy. Rapp, Folsom and Presley share co-production responsibility. Included in the list is a unique film project rooted in Folsom and Rapp’s theatrical experience: The Crusade of Connor Stephens. An award-winning 2017 Off Broadway play (seven MITF NYC Awards including Outstanding Play), Diceman has optioned it for a film adaptation with the play’s writer/director/producer Dewey Moss serving as Executive Producer. Currently mid-process in its fully funded development phase, Folsom and partner/filmmaker Derek Presley are adapting the screenplay, with Rapp producing. From Diceman House, “The Crusade of Connor Stephens is an examination of important issues that plague our current society, shining a spotlight on bigotry, hatred and deadly gun violence and exploring the effect vitriolic words can have on innocent lives. The plot, unfolding against the backdrop of a Texas town, involves a gay couple who are victims of a religiously fueled hate crime. At its core is a story of a contemporary family, with all the twists and turns of familial relationships, interwoven with a complex struggle to justify principles ingrained in Southern Baptist tradition with the realities of modern life. (Learn more at http://www.crusade2017.com/#about)

People began to take notice of Rapp and Folsom traveling the country as a creative business team. New worthy projects started appearing almost by the minute. Rapp realized they needed a strong development partner to help turn their visions into reality. But whom should she reach out to? “The moment I saw Gregory Patterson announce his new consulting business on Facebook, I picked up the phone and made a lunch date with him.” Patterson has spent a lifetime dedicated to arts management and development/marketing, best known in N. Texas for his exemplary decade as Director of Development and recently Interim Managing Director at Water Tower Theatre. Nobody knows the arts finance scene in this region better than Gregory Patterson. Rapp hoped she had found her man to take on the expanding funding challenges from a Texas base, while Andy Baldwin had located Dallas-based, but New York savvy, fund development partner Terry D. Loftis. At the same time, Patterson had dreamed of forming his own theatre company to fill what he saw as a need for many years but had not found the right partners to enlist in the project. In no time at all, he realized Folsom and Rapp were the dream team he had waited for. The Classics Theatre Project sprang to life. Patterson reflects on his new partners, “Joey Folsom is equally talented on stage and off, as a leader, actor and director. Bren Rapp brings a daring, entrepreneurial spirit with sound business practice and creativity to any endeavor she puts her mind to. It’s a win-win prospect.” Patterson envisions a top-notch, professional theatre company dedicated to producing classic theatrical works of the 19th and 20th Centuries with full relevance for today’s audiences. The company will strive to find the universal in great works and present them as publicly viable entertainment options, attracting both seasoned audiences and newcomers. The Classics Theatre Project will exist as an investor-based, for profit entity as opposed to the standard non-profit theatre model. The company plans to mount three shows the first year without a predetermined season, allowing for selection of shows that reflect the interests and concerns of the times. The first production is scheduled for Summer 2018. Gregory Patterson is Executive Director; Joey Folsom is Artistic Director, and Bren Rapp is Producing Managing Director. According to Rapp, “Our goal is to do something new with our business model. We will focus on private investment to reinvent the current idea of arts patronage, making the company a for profit entertainment venture that can offer returns to investors rather than seeking donors simply offering a tax write-off or depending on an already tapped out system of city funding and endowment money. The plan also includes offering attractive corporate sponsorship packages and a real focus on self-sustaining revenue sources including educational programs and the development of traveling festival pieces that can be performed by small casts, regionally, nationwide and beyond to both bring in funds and build the company brand.” To learn more about The Classics Theatre Project, contact Gregory Patterson Consulting at gregorypattersonconsulting.com,  or call 469-652-6614.

Call her a manic madam on a mission to bring Texas performing arts to national acclaim, or a synergistically energizing entrepreneur applying for profit business acumen to artistic expression, Bren Rapp aims to create a world of wonderful with the projects and alliances she wholeheartedly embraces.